In 2008 Singapore hosted the first night-time event in Formula One history. It was also the 800th race in the world championship and since 2009 Grand Prix Adventures have been supplying F1 hospitality packages for all it's clients who want to enjoy the Singapore GP and many of them come back time and time again ever since.

Some Words About This Grand Event!!!

The 80,000 spectators have stunning views; the famous skyline is the backdrop for the street circuit, which uses the public roads around Marina Bay. The track passes several local landmarks Singapore Flyer, Supreme Court and Parliament and it incorporates Esplanade Drive and the Anderson Bridge. It replicates daylight conditions using powerful lighting systems. 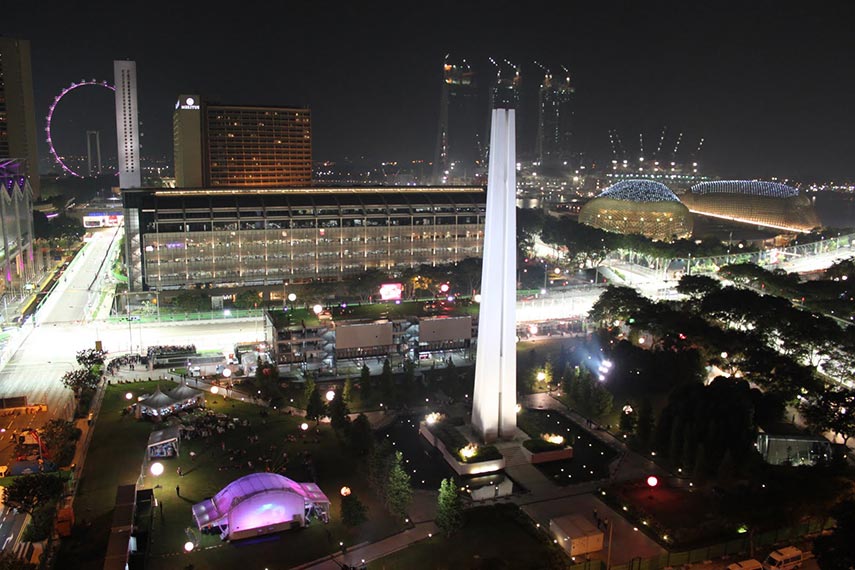 Starting at 8pm local time - this means that it can be broadcast at a convenient time for European audiences (2pm) and goes some way towards moderating the temperature. One can only guess how high the temperatures would be during the day - as even at 8pm the cockpit temperature can still reach 60C.

The creators of this Grand Prix hope for more than a race: "We envision it to be a national festival" (Mr S I Swaran, Minister of State for Trade and Industry)

The track is twisty and bumpy with heavy braking zones; most parts of it run very close to the walls. The layout makes overtaking very difficult and pole has won 6 out of the 8 races. Overtaking is mostly attempted at the end of the first section - where speeds can briefly fly. The difficulty is highlighted by the number of collisions seen here and the fact that the safety car has appeared in every race so far. Expect debris. Add to this the humidity and lack of daylight and this is an extremely challenging circuit.

"It's physically draining, and you've also got the mental challenge of racing so close to the walls with a small margin of error." Nico Hulkenberg.

The purpose-built section of track includes the start/finish area, the pits and paddock. The latter stages of the lap see the track pass beneath one of the spectator grandstands.

It has more corners than any other circuit on the calendar with 23 (14 left-handed and 9 right-handed). Consequently, the race has some of the longest lap times in Formula One and no race to date has been completed in less than 1 hr 56 mins.

Another issue can be found near the Anderson Bridge when the cars pass over something underground that creates electrical interference. Actuators that control the throttle position and the clutch are no longer under the control of the driver.

"..the first time we went to Singapore it was quite a serious problem...but now we know what countermeasures to take, such as electrical shielding on the car and a few other software changes." Tim Goss, McLaren Technical Director.

Fernando Alonso won the first F1 race here in 2008 from 15th place. An impressive statistic; if it hadn't been for the controversy that followed. A year later it emerged that Nelson Piquet Jr had been ordered by Renault to crash on purpose - to ensure a timely safety car - aiding Alonso's pathway to the front.

In Singapore, Alonso has finished on the podium 5 times and won twice. In 2010 he did the 'Grand Slam' (pole, win, fastest lap, led every lap). After finishing with points in the first 7 races here, last year he was forced to retire with gearbox issues.

Hamilton has also won twice, in 2009 with McLaren-Mercedes and in 2014 with Mercedes.

Red Bull is the most successful team in Singapore with 4 wins and 9 podium finishes. In sharp contrast to their current domination in the Constructor's Championship; Mercedes have only one podium finish to date, with Hamilton's win in 2014.

History of the Singapore Grand Prix

The first organised race the 'Orient Year Grand Prix' was held in Singapore in 1961, the following year it became the Malaysian Grand Prix and when Singapore achieved independence in 1965 - became known as the Singapore Grand Prix.

However, the Thomson Road Circuit was one of the most dangerous in the world, featuring among other things, bus stops and monsoon drains. Following several fatalities, the difficulty of implementing adequate safety measures and the idea that it was encouraging reckless driving - motor racing was banned in Singapore after the 1973 Grand Prix.

In 2008 it returned with the first Formula One race held here, a hugely popular 110,000 ticket sell out. This event also included the Amber Lounge Party - created by Sonia Irvine (sister of F1 driver Eddie Irvine) and well attended by drivers and celebrity fans.

Hamilton referred to the initial track as being 'twice as hard to negotiate as Monaco' and considering Monaco was described by Nelson Piquet as 'like trying to cycle round your living room' - twice as hard sounded impossible.

In 2009 modifications were made to Turns 1,2 and 3 (for overtaking) and Turn 10 (Singapore Sling chicane) where high kerbs caused many accidents in 2008.

These kerbs were "little tortoises that would wreck the car if you get something wrong" according to Felippe Massa. They were re-profiled for the 2010 race, though this modification made the chicane even more dangerous as it became "the worst corner in Formula 1" (Hamilton).

2013 saw the Singapore Sling chicane removed and replaced with a single-apex left-hand bend. With corner entry speed now 40 km/h faster - for safety an extra layer of TecPro barriers lined the end of the turn. A further attempt to improve overtaking was taken in 2015 when they altered the approach to Turn 13.

In 2015 a spectator made the news, as he crossed the track on the straight after Anderson Bridge as Vettel and Ricciardo sped by. He had sneaked through a gap in the fence.

At this point last season Hamilton had a championship lead of 53 points ahead of Rosberg and 74 ahead of Vettel.

Vettel won the 2015 race from pole, with Ricciardo 2nd and Raikkonen 3rd. Rosberg coming in 4th and Hamilton recording his first retirement of the season did nothing to improve Mercedes Singapore podium standing... 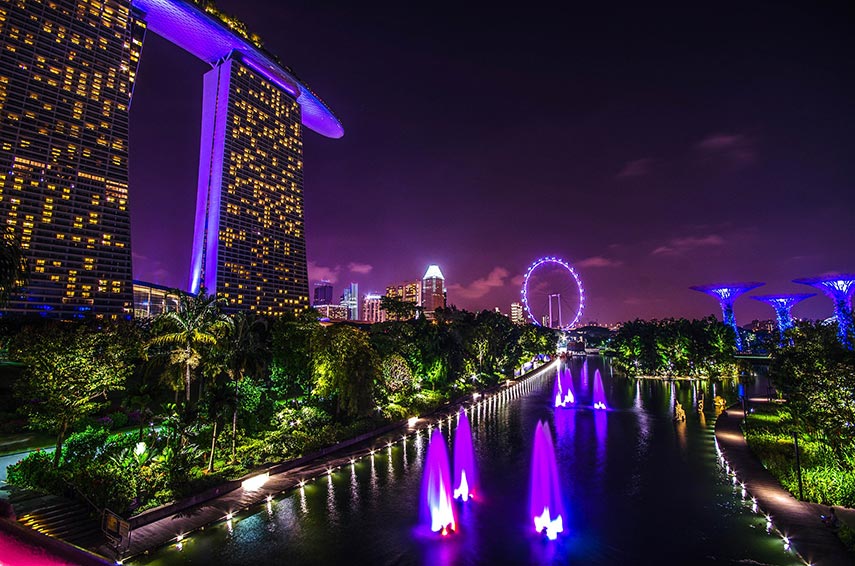 This year however, Lewis Hamilton is only 2 points ahead of Rosberg in a very tightly fought championship battle. Will Mercedes improve their form here? Can Sebastian Vettel continue his successes? How will the young and bold Max Verstappen cope with this demanding track?

The 9th Formula One race that was held in Singapore - was quite a spectacle. To read more about the 2016 Singapore GP.

The Singapore Grand Prix was allocated a tentative date of September 16 in the preliminary 2018 calendar issued by the FIA's World Motor Sport Council in Geneva on June 19, 2017. The event (together with the Chinese Grand Prix in Shanghai) was then pending approval from the owners of the commercial rights. The track and F1 announced an extension for the race to 2021 on the eve of the 2017 competition. This race was a pivotal moment in the season as polesitter and title candidate Sebastian Vettel collided with his Ferrari teammate Kimi Räikkönen and Max Verstappen of Red Bull in the opening corner, forcing all three drivers to withdraw. See our report page for more on all the excitement of the 2017 Singapore Grand Prix.

Ferrari went into Singapore expecting to win after a poor weekend in Monza. But Lewis Hamilton won the pole position, beating both Max Verstappen and Sebastian Vettel's Ferrari. Esteban Ocon retired after an incident involving the two Racing Point Force India drivers, Sergio Pérez and Ocon, at the start of the race. Verstappen was passed by Vettel just before the Safety Car was brought out. On lap 15, Vettel was the first of the front-runners to pit. While the majority of those who pitted at that time chose soft tyres, he was given ultrasoft ones. He started behind Pérez but caught up to him after one lap.

On lap 18, Verstappen stopped for soft tyres and came out barely in front of Vettel. Vettel chose not to attack in order to finish the race because he was on higher-end ultrasofts. Pérez collided with Sergey Sirotkin on lap 34, which led to a drive-through penalty for him. After knocking Brendon Hartley off the track, Sirotkin received a 5-second time penalty. Later in the race, he was engaged in a battle with Romain Grosjean as Hamilton and Verstappen approached to pass them. Verstappen was able to cut the distance to Hamilton and almost pass him as a result of Grosjean's refusal to let the leaders pass and continued assault on Sirotkin, extending his 40-point championship advantage over the German.

At the Singapore Grand Prix, Sebastian Vettel defeated teammate Charles Leclerc thanks to a strategy call from the Ferrari pit wall, earning him his first victory in more than a year.

Leclerc, who started on pole and led for the first 20 laps, was obviously dissatisfied with the outcome of the race and expressed his frustration to the team through a series of angry comments sent over team radio. He was instructed to bring the car home safely under one of the three Safety Cars toward the finish of the race, to which he replied, "I won't do anything stupid, but this is not fair".

Despite his frustration, he was unable to use it to his advantage and ended 2.6 seconds behind his teammate to give Ferrari their first season-opening one-two finish.

In third position for Red Bull, Max Verstappen got away from the two Mercedes, who also suffered time during the pit stops they had.

Coming soon: See our Singapore VIP Hospitality Packages for what we have to offer and our prices, you won't regret it!

Call us today on 01382 480077 and we would be more than happy to discuss your requirements if you are interested in going which would include events, holiday plans and above all the spectacular F1 experience included in a Singapore Grand Prix Hospitality Packages. 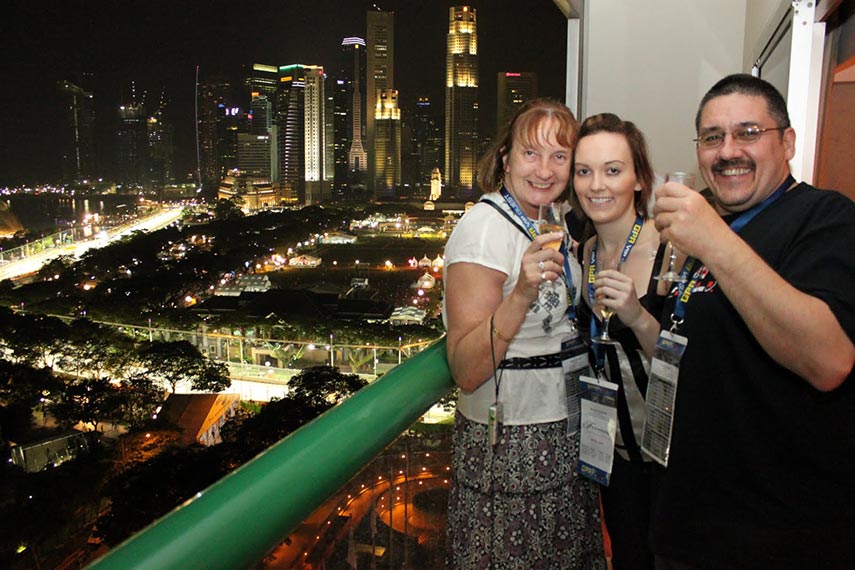