The Championship Race is still on, but Max is closing in to win!

“It means a lot to me”(Sergio Perez)

What a night and victory for Perez in Singapore

We were all excited about the start of this race in Singapore and would Max Verstappen be able to clinch the title tonight even though there are still 5 more races to go after today his lead is that great he could do it. 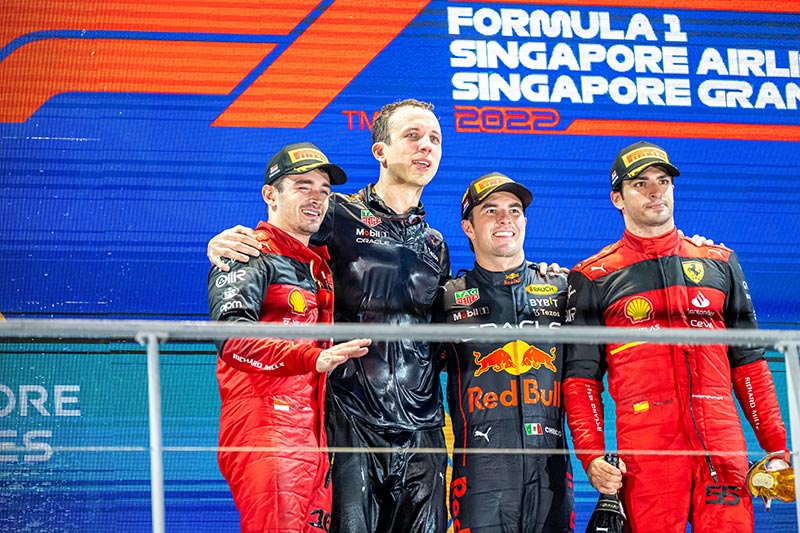 The start of the Singapore grand prix was delayed initially for over an hour due to a heavy continuous downpour from the heavens and the formation lap did not start until five passed nine local time. Despite the fact that it had stopped raining, the track was still slippery and would make things difficult.

At the start of the race, pole-sitter Leclerc handed the lead to Perez into Turn 1 and Sainz easily passed Hamilton for third place after the latter drove wide into the same turn and nearly went off early, but managed to gain his composure, while the championship leader got bogged down and was way behind losing 5 places back to 12th and would go even further back to 13th when Ricciardo over took him, so not a great first lap for the potential champion, the spray and the sparks were flying up above the cars, all making it an exciting start to the race. Vettel in his final Singpaore Grand Prix made a good start and was up 8th, can he stay until the end and be in the points.

Verstappen would start making up ground and was up to 9th when on lap 9 the safety car had to come out as there was a collision between Nicholas Latifi and Zhou Guanyu on lap 7 and subsequently Latifi will receive a 5-place penalty on the grid for the next race in Japan the following week.

“the guy just fully squeezed me into the wall guys, I don’t know what is he doing” - Zhou Guanyu

Verstappen was quick to jump onto it after the restart once the safety car had left, he got ahead of Vettel.

Fernando Alonso would have to stop bringing about another yellow flag and the virtual safety car on lap 21. Albon would hit the wall on lap 25, and Lewis Hamilton would hit the barriers on lap 33, turn 7, but would continue, Yuki Tsunoda would hit another barrier at 80mph on lap 36, bringing on the safety car again, prior to which the majority of drivers had halted for slicks. Importantly, the McLaren drivers hadn't; when they were placed fourth and sixth for the restart, Lando Norris changed to a new pair of medium tyres, and Daniel Ricciardo selected slicks.

Seems like quite a few cars were struggling with the wet conditions and the track this year.

On Lap 39, the race was restarted, and Perez maintained his lead. While George Russell and Mick Schumacher sustained punctures after momentarily colliding into Turn 1, Verstappen experienced a heavy lock-up in an attempt to pass Leclerc and was briefly demoted to last place.

At one point everyone apart from Bottas was on the medium compound tyre and Verstappen was climbing up leader board into 5th until something went wrong and the brakes locked, and he went off the main track, were the tyres and brakes too cold? He manged to get back in the race, but had lost a few places.

Lap 40 saw George Russell for Mercedes experiencing a puncture and had to pit and that put him last after he drove out of the pits with new tyres. Lap 57 saw Verstappen who was gaining places after his mishap early and was behind Hamilton, but when Lewis tried to overtake Vettel his brakes locked and that gave Max the chance to overtake him into 8th place and then he overtake Vettel not much later, to move him into 7th place, but the night is all about his Red Bull teammate Sergio Perez who has had a fantastic race as he led from the start to win the 2022 Singapore Grand Prix, and his greatest race and grab the headlines from Max Verstappen.

However, the triumph was one that almost never materialised because FIA stewards took three hours after the race to make a judgment that usually is taken when the race is on-going. After the race, Perez was called in to give an explanation for his behaviour while the safety car was in place.

He ultimately received a five-second time penalty for the first safety car offence and for second one, a two penalty points on his licence, but he still managed to win the race because he was more than seven seconds ahead of Ferrari’s driver Charles Leclerc.

Carlos Sainz was to say at the end of the race: “It was very tough out there. I never really got into a rhythm in the wet and then couldn’t challenge the top two guys. I had to settle for P3, but the good thing is I didn’t do any mistakes and could bring the car home and be quick towards the end of the race. It’s a good result for the team in the Constructors’ Championship.” 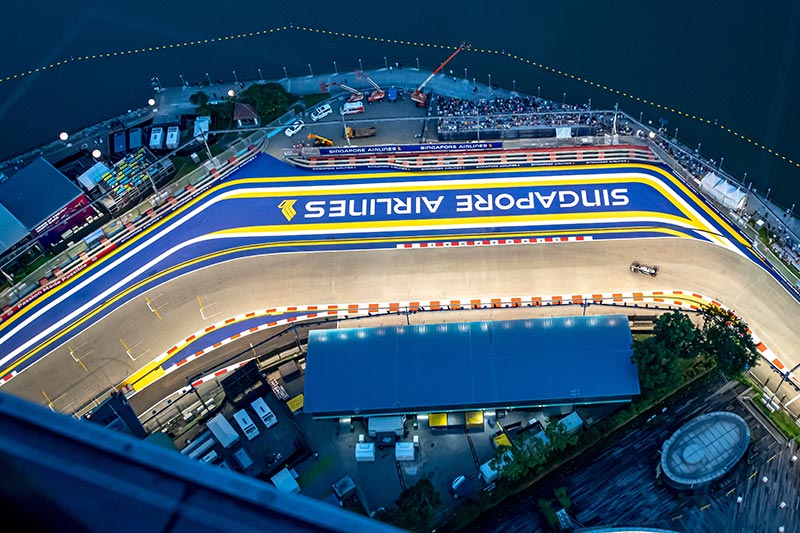