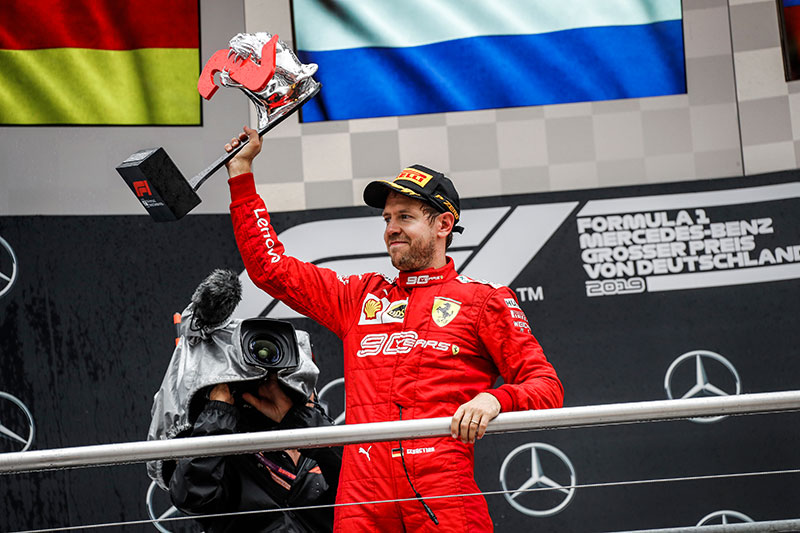 "I come from an ordinary family - my dad is a carpenter, a roof maker - and we've always loved racing together."

According to Vettel he was 'terrible' at school, instead focusing on his childhood heroes Michael Schumacher, Michael Jordan and Michael Jackson. But this could just be modesty from the German, as Red Bull owner Dietrich Mateschitz described him thus: "Vettel is one of the young guys with extraordinary potential… He is fast, he is intelligent, and he is very interested in the technical side."

Good humoured and friendly; he counts many other Formula One drivers among his friends. Inspired by American bomber pilots in WWII, Vettel traditionally names his cars saying it is "important to have a close relationship with a car." Currently Margharita, names have included Hungry Heidi (2013) and Luscious Liz (2010).

Karting: Vettel started amateur karting at just 3½ years old and was racing in the Kart Series aged 8. By the age of 11 he had been accepted into the Red Bull Junior team, winning several titles.

2005: He drove for ASL Mucke Motorsport in the Formula 3 Euroseries; finishing in 5th place with 63 points and taking 'Top Rookie'. This success allowed him to test the Williams FW27 Formula One car.

2006: He was 18 when he became a test driver for BMW Sauber in Formula 1; becoming their 3rd driver at the Turkish Grand Prix that year.
Following the serious crash of Robert Kubica at the Canadian GP Vettel substituted him at the US Grand Prix. He finished 8th - taking his first World Championship point - becoming the youngest driver ever to score a point in Formula One (19 years, 349 days). This record was previously held by Jenson Button (20 years, 67 days - finishing 6th at 2000 Brazilian GP)

2007: He took his first win at the Nurburgring in the Formula Renault 3.5 Series. When he was called up to race in Formula One permanently he had been leading the championship. At Toro Rosso he initially struggled. But at the rainy Japanese Grand Prix he drove an impressive race and managed to work his way up to 3rd place - before inexperience caused him to crash into Mark Webber while the safety car was out, putting them both out of the race. The following race in China, saw Vettel come 4th, having started 17th. This was his and Toro Rosso's best result to date. Before his arrival Toro Rosso had averaged 14th place.

2008: Another early struggle⁖. he was the only driver to have failed to finish a single race after 4 races. But then he won at the Italian Grand Prix - becoming the youngest driver to win a Formula One Grand Prix (21 years, 74 days). German media dubbed him 'Baby Schumi'. "To compare me with Michael Schumacher is just a bit ridiculous." He won Rookie of the Year at the Autosport Awards.

2009: Replaced David Coulthard at Red Bull. At the Chinese Grand Prix he became the youngest driver to win for 2 different teams (21 years, 287 days). He achieved 4 wins in total this season, also winning at the British, Japanese and Abu Dhabi Grand Prixs. Vettel came 2nd in the drivers' championship - with 8 podiums in total - the youngest ever runner up.

2010: Won his first World Championship, becoming the youngest driver ever to do so - at the age of 23. It was only the third time in Formula One history that the World Champion had not previously been championship leader at any point of the season; an exciting down-to-the-wire title snatch. He won German Sports Personality of the Year. 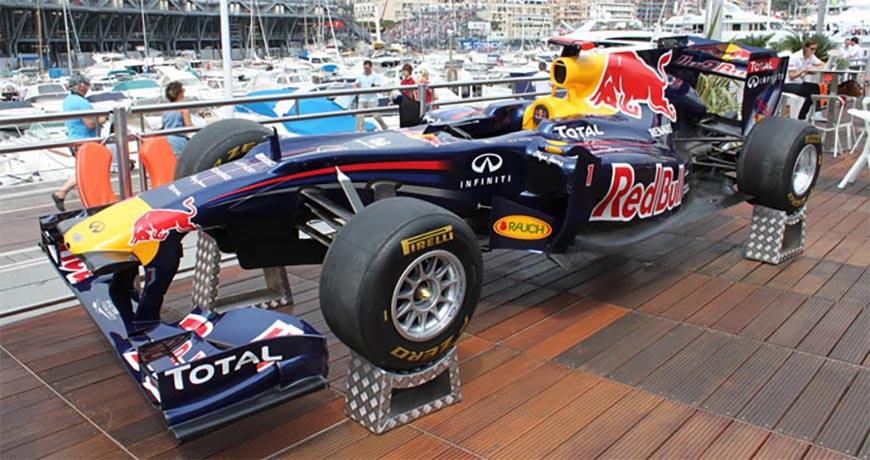 What a Year, What a Championship

2011: Didn't just win the World Championship, he did it in style. In an absolutely astonishing season, Vettel took 11 wins and 17 podium places - only 4th place in Monaco and not finishing in Abu Dhabi – could break the spell. The comparison with Schumacher grew, as both drivers began to dominate the sport the season after winning the championship.

2013: Won the World Championship with 13 wins and 16 podiums; another season with Vettel dominating proceedings.

2014: Team mate Daniel Ricciardo. In Winter Testing Vettel had struggled with reliability issues. Things did not improve for him as he became the first defending World Champion not to win a race since Jacques Villeneuve in 1998. He could only achieve 4 podiums - but managed to finished 5th.

2015: A move to Ferrari completed his childhood dream, "When I was a kid, Michael Schumacher in the red car was my greatest idol." Team mate Kimi Raikkonen. Moving to Ferrari improved his form; with 3 wins and 13 podiums, he finished 3rd in the drivers' championship.

2016: Vettel has taken 6 podiums so far this season, but in an era of Mercedes domination - currently no wins.