Another Epic Win For Lewis In Italy At The EMILIA ROMAGNA circuit!

Can Anyone Stop Him, Not Likely! 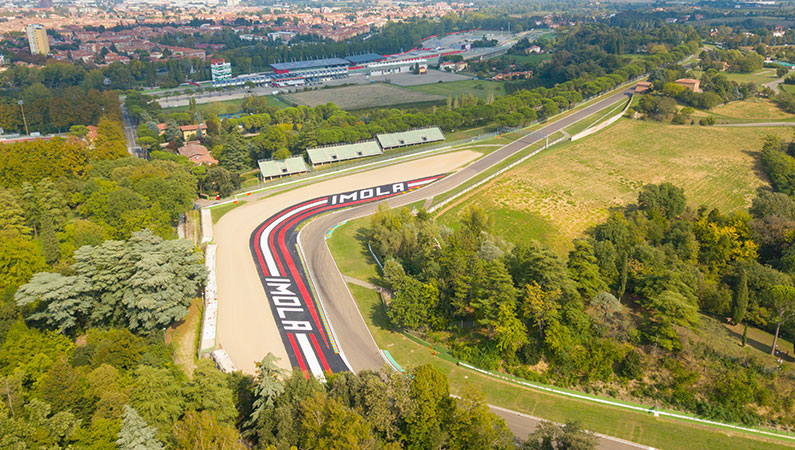 “I’m going to pick up the pace…don’t try to stop me.” (Lewis Hamilton)

Another win for Hamilton, and with a Mercedes one-two another Constructors’ Championship for the team - a record 7th consecutive championship win.

Lewis Hamilton is now 85 points ahead and will win the championship at the next race in Turkey, unless Bottas outscores him by 7 points.

Today Hamilton had a poor start from 2nd, dropping behind Verstappen to 3rd – but pit tactics and a safety car were about to assist him.

As Verstappen and Bottas pitted for the first time (Lap 18 & 19), Hamilton stayed out longer and tried to put some distance in - with some fast laps.

Here timing was everything and Hamilton finally pitted on Lap 29 - after the safety car came out following Esteban Ocon’s gearbox failure. The safety car wasn’t out for much longer than he was in the pits and when Hamilton re-emerged he had a 0.5 second lead.

But it wasn’t all plain sailing. During the second part of the race Mercedes noticed vibrations from Hamilton’s rear tyres – a sign of potential imminent failure. Hamilton would need to pit again.

Valtteri Bottas began in pole and made a great start - but from Lap 2 struggled with a damaged car after colliding with a piece of debris left on the track by Vettel’s Ferrari. A significantly large piece of debris was trapped in his ‘barge boards’ (behind the front wheels) and cost him around 50 points of downforce/at least 0.5 seconds per lap.

Mercedes later tweeted a photo of the sizable piece of debris stating: ‘we think this might belong to you @ScuderiaFerrari.’

On Lap 42 Bottas ran wide, touching gravel and allowing Verstappen past into 2nd. But 10 laps later Verstappen suffered a right-rear puncture forcing him to retire and putting Bottas back in 2nd place – where he would finish. Quite how Verstappen suffered this puncture is currently unexplained – but Pirelli will investigate.

Following Verstappen’s retirement, another safety car came out to allow the damage to be cleared away safely. To protect their track position Ricciardo, Leclerc and Albon chose not to stop, while Hamilton, Bottas, Perez, Kvyat, Sainz Jr and Norris pitted for fresh tyres.

Towards the end of the safety car period Williams’ George Russell - who had been looking to score his first Formula One point – lost control and hit the barrier while trying to ‘warm up’ his tyres behind the safety car.

As the race restarted those battling for 3rd – who hadn’t pitted – Ricciardo, Leclerc and Albon struggled to get their tyres up to temperature. Kvyat overtook Albon and Perez in one move, then passed Leclerc up the hill out of Tosa.

Ricciardo was the only ‘old tyre’ driver to hold off Kvyat and finished 3rd - taking his second podium in 3 races.

“It was a bizarre one, I’m not sure what happened to Max but that put us in the fight for a podium. Cyril will not be getting another tattoo.” (Ricciardo)

Daniil Kvyat drove well to take 4th. Making up for Alpha Tauri teammate Pierre Gasly having retired early on with an engine problem.

Leclerc held off a challenge from Racing Point’s Perez to finish 5th.

Perez argued that he didn’t need to pit during the final safety car and was disappointed by his team’s instructions to do so. “We had the podium very much in our pocket” before the pit stop. He had to make do with 6th.

Nice to see Raikkonen finishing in the points in 9th. Giovinazzi completes the top 10 – in 10th.

So, Hamilton wins at the track where we lost his hero Ayrton Senna. To commemorate - the winning trophies have a 0.14 carat diamond marking the location on the track where Senna died in 1994.

Formula One heads to Istanbul for the next race on November 15th.

A track that promises excitement. We can’t wait!