MCLAREN: A FORMULA ONE HISTORY 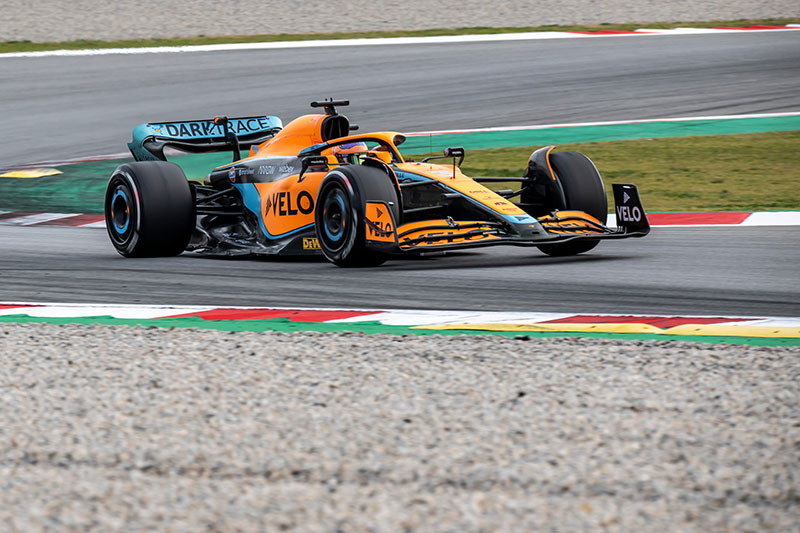 McLaren was founded in 1963 by racing car driver and engineer Bruce McLaren, making McLaren the 2nd oldest active team in Formula One.

Bruce McLaren was a works driver who had won 3 Grand Prixs for Cooper and came 2nd in the 1960 World Championship.

The desire to set up his own team came about when McLaren wanted to participate in the Australasian Tasman Series and was unhappy with the 1.5 litre engines insisted upon by Charles Cooper – particularly as the Tasman Series allowed 2.5 litre engines. So, McLaren set up his own team (with custom-built Cooper cars) for him and Timmy Mayer to race in.

Between 1967 and 1971 the team dominated the Canadian-American Challenge Cup (Can-Am).

1966: For the first 2 years in Formula One, Bruce McLaren was the only driver for the team. He made his debut at the Monaco Grand Prix in 1966. Unfortunately, McLaren only lasted 9 laps before he suffered an oil leak and was forced to retire. The early engines were underpowered and unreliable.

1968: McLaren was joined by Denny Hulme this season. Five years after they were founded, McLaren won their first Formula One race at the Belgian Grand Prix in 1968 – with Bruce McLaren taking the win. He also won the Race of Champions at Brands Hatch. With Hulme taking the International Trophy at Silverstone and wins at the Italian and Canadian Grand Prixs. McLaren came 2nd in the Constructors’ Championship.

1970: Each driver achieved a 2nd place in the 1st two Grand Prixs of the season. But in June tragedy struck - as Bruce McLaren was killed while testing the new M8D Can-Am car at Goodwood. Teddy Mayer took over as team principal. Hulme was then partnered with Dan Gurney - who won the 1st two Can-Am events - but left mid-season and was replaced by Peter Gethin.

1971: Drivers Hulme and Gethin continued for McLaren. Mid-season Gethin left the team and was replaced by Jackie Oliver. There were no race wins this season for McLaren.

1972: Things began to improve when Hulme won McLaren’s first race for 2 ½ years at the South African Grand Prix. And between him and Peter Revson they won another 10 podiums this year. Jody Scheckler made his debut for the team at the final race of the season. McLaren came 3rd in the Constructors’ Championship.

1973: The McLaren M23 (designed by Gordon Coppuck) was the team’s new car for 1973 and it would last for 4 years. This car was a combination of parts of the M19 (F1) and M16 (Indianapolis 500) cars. Hulme won the Swedish Grand Prix and Revson took wins in Britain and Canada – the only two wins of his career.

1974: Former World Champion (1972) Emerson Fittipaldi joined the team. Wins in Brazil, Belgium and Canada helped him to win the Drivers’ Championship by 3 points. It was teammate Hulme’s final season driving in Formula One and he finished 7th in the championship. McLaren won their first Constructors’ Championship.

1975: Fittipaldi came 2nd in the Drivers’ Championship behind Ferrari’s Niki Lauda. Hulme’s replacement Jochen Mass won his only Grand Prix in Spain. Fittipaldi left at the end of the season to join Fittipaldi/Copersucar – his brother’s racing team.

1976: James Hunt replaced Fittipaldi. And Hunt’s famous battle with Niki Lauda (who nearly died in a crash at the German Grand Prix this year) began. Hunt got the upper hand this season – taking the Drivers’ Championship. But Ferrari won the Constructors’ Championship.

1977: Mass was replaced by Patrick Tambay. This season Ferrari and Lauda were just too strong, and Hunt could only finish 5th in the championship. McLaren were 3rd in the Constructors’ Championship.

1978: McLaren struggled. Hunt was replaced at the end of the season by Ronnie Peterson – who was tragically killed at the Italian Grand Prix. John Watson then replaced him to partner Tambay. 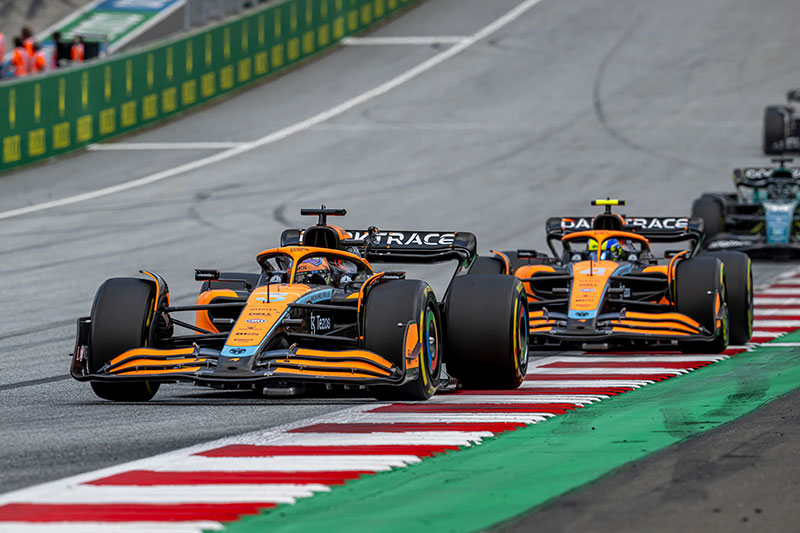 1981: A merger with the Ron Dennis Project 4 Formula 2 team meant that a new car could be created – the MP4. Drivers were John Watson and Andrea de Cesaris. The team moved their base from Colnbrook to Woking.

Renault/Ferrari and Brabham had started using 1.5 litre turbo-charged engines and McLaren needed one of their own.

1984: By 1984 Prost had been ‘fired’ by Renault and was back driving for McLaren. The TAG engines were up and running – helping the team to dominate. 12 wins and 2 ½ times as many points as 2nd place Ferrari in the Constructors’ Championship perfectly highlighted this dominance.

Lauda beat teammate Prost in the Drivers’ Championship by just half a point – the smallest margin in Formula One history.

1986: Williams were experiencing a resurgence of their own with a new Honda engine and drivers Nigel Mansell and Nelson Piquet. To make matters worse, Lauda’s replacement at McLaren Keke Rosberg was struggling with the car.

But Prost won the Drivers’ Championship at the final race in Australia - helped all season by Williams splitting the points between both drivers and then during the race a Mansell puncture/precautionary pit stop for Piquet.

1988: Honda began to supply McLaren with engines and the team signed Ayrton Senna. An intense battle between teammates Prost and Senna ensued – between them they won 15 out of 16 races.

In Portugal, tensions came to a head when Senna ‘squeezed’ Prost at the pit wall. Prost won the race, but was furious – slamming Senna for dangerous driving, adding that ‘if he wants the World Championship that badly he can have it.’ Senna won the Drivers’ Championship at the Japanese Grand Prix.

1989: Turbo engines were now banned, so Honda created a new 3.5 litre ‘naturally aspirational’ V10 engine. Prost believed that the team were favouring Senna – so announced his decision to leave the team at the end of the season.

McLaren won the Constructors’ Championship. Prost won the Drivers’ Championship in Japan – Senna had won the race but was later disqualified for causing a collision between himself and his teammate.

1990: Gerhard Berger joined McLaren to replace Prost. Again, the Drivers’ Championship was settled at the Japanese Grand Prix. And again, there was another collision between Senna and Prost (no longer teammates, but still strong rivals) this time at the first corner - forcing both to retire. But despite this, Senna won the championship on points. McLaren won the Constructors’ Championship again.

1993: Due to financial reasons Honda withdrew from Formula One and McLaren switched to Ford engines for 1993. Senna won 5 races (including a record 6th win at Monaco) but Williams won both the Drivers’ (with Prost) and Constructors’ Championships. Senna signed for Williams for the 1994 season.

1994: New Peugeot engines. Drivers Mika Hakkinen and Martin Brundle scored 8 podiums, but no wins. The Peugeot engines didn’t last long – due to reliability issues and multiple engine failures – Mercedes-Benz with Ilmor design were to replace them in 1995.

1996: Hakkinen and David Coulthard were named the team’s drivers for 1996. It was McLaren’s 3rd consecutive season without a win.

1997: Coulthard’s win in Australia broke the ‘no win’ streak. Pace had improved, but the team still struggled with reliability.

1998: Williams’ dominance started to falter – they lost their works Renault engine after Renault temporarily withdrew from Formula One. 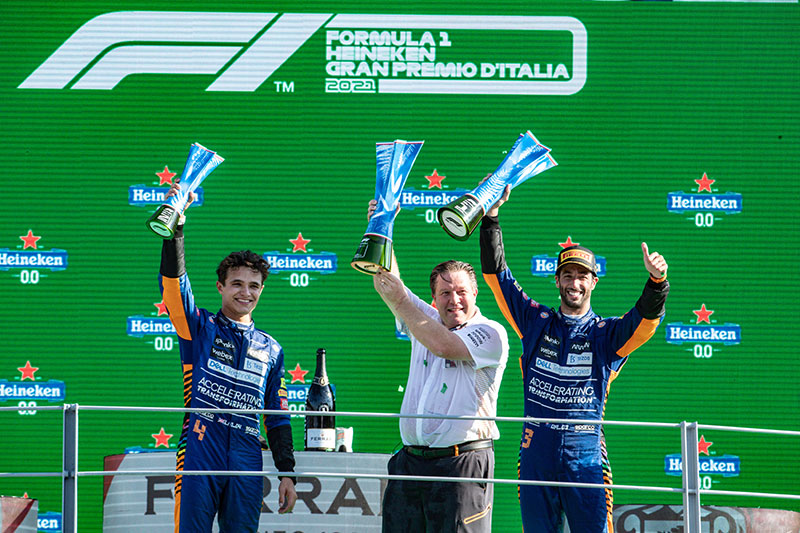 2000: McLaren won 7 races, but Schumacher and Ferrari were ascending and won both the Drivers’ and Constructors’ Championships.

2001: Hakkinen retired and was replaced by Kimi Raikkonen.

2003: McLaren struggled with reliability issues, but Raikkonen consistently scored points and only lost the Drivers’ Championship to Schumacher by 2 points.

2004: Raikkonen achieved the team’s only win in Belgium this year. McLaren finished 5th in the Constructors’ Championship. Their worse result since 1983.

2005: Coulthard left for Red Bull and was replaced by Juan Pablo Montoya. Raikkonen and Montoya won 10 races between them, but lacked reliability in other races and Fernando Alonso won the Drivers’ Championship – with Renault winning the Constructors’ Championship.

2006: Ferrari and Renault had great pace and reliability. McLaren achieved no wins this season. First Montoya left the team acrimoniously, then Raikkonen left for Ferrari.

2007: Fernando Alonso and Lewis Hamilton were the team’s new drivers. They took 4 wins each. Rumours began that Alonso couldn’t cope with rookie Hamilton’s competitiveness. And it got worse...

Alonso was judged to have ‘deliberately impeded’ Hamilton during qualifying and consequently the team could not score points at the event. McLaren were then investigated and found guilty by the FIA of having ‘proprietary technical blueprints’ of Ferrari’s car. The consequence of ‘Spygate’ meant that McLaren were excluded from the Constructors’ Championship and fined $100 million.

The drivers were able to continue without penalty and they both lost out on the World Championship title to Raikkonen by one point.

Alonso left the team and was replaced by Heikki Kovalainen.

2008: The battle this season was between Hamilton and Ferrari. At the start of the final race in Brazil - Hamilton had a 7-point lead over Felipe Massa. Massa won the race, but Hamilton moved to 5th at the final corner of the final lap to dramatically win the title. 5th was all he needed.

2010: McLaren lost their status as the Mercedes works team, but Mercedes still provided their engines. World Champion Jenson Button was signed as teammate to Hamilton.

2013: Hamilton left McLaren for Mercedes and was replaced by Sergio Perez. The team failed to achieve a podium for the first time since 1980.

2015: McLaren ended their engine deal with Mercedes and reignited their Honda partnership. Alonso returned to the team and Button remained, with Magnussen now the test driver. Again, they struggled with reliability issues, but made some steady progress.

2016: An improvement. However, Alonso suffered rib fractures and a collapsed lung in a huge crash at the Australian Grand Prix. He was forced to miss the next race in Bahrain and was replaced by Stoffel Vandoorne – who scored the 1st point of the season for McLaren by finishing in 10th. Alonso eventually finished 10th in the championship, with Button 15th.

2017: Button retired, except for a brief return to cover for Alonso at the Monaco Grand Prix – while Alonso was participating at the Indianapolis 500. McLaren came 9th in the Constructors’ Championship. The team split from Honda and the engines were to be replaced by Mecachrome-assembled Renault engines for 2018.

2018: Alonso and Vandoorne remained as the team’s drivers, with Lando Norris as reserve. Again, they struggled for consistency and failed to make it to the Q2 stage 21 times. McLaren finished 357 points behind Red Bull (who had the same engine) in the Constructors’ Championship.

2019: Alonso was replaced by Carlos Sainz Jr. At the Brazilian Grand Prix Sainz Jr achieved the 1st podium for McLaren since the Australian Grand Prix in 2014. Sainz Jr had finished in 4th - but was promoted to 3rd following a post-race penalty awarded to Hamilton.

2020: Norris scored his first ever podium – 3rd – at the Austrian Grand Prix in a season marred (and considerably shortened) by the Covid-19 pandemic. Sainz Jr took 2nd in Italy. McLaren finished 3rd in the Constructors’ Championship with 202 points. Sainz Jr was 6th (105 points) and Norris 9th (97 points) in the Drivers’ Championship.

2021: The Renault deal came to an end and McLaren returned to Mercedes for their engines. Daniel Ricciardo replaced Sainz Jr (who moved to Ferrari) to partner Norris. McLaren scored their first 1-2 since 2010 (Canadian Grand Prix) in Italy this year. Norris achieved the team’s first pole of the hybrid era at the Russian Grand Prix – unfortunately he could not convert this into a win. 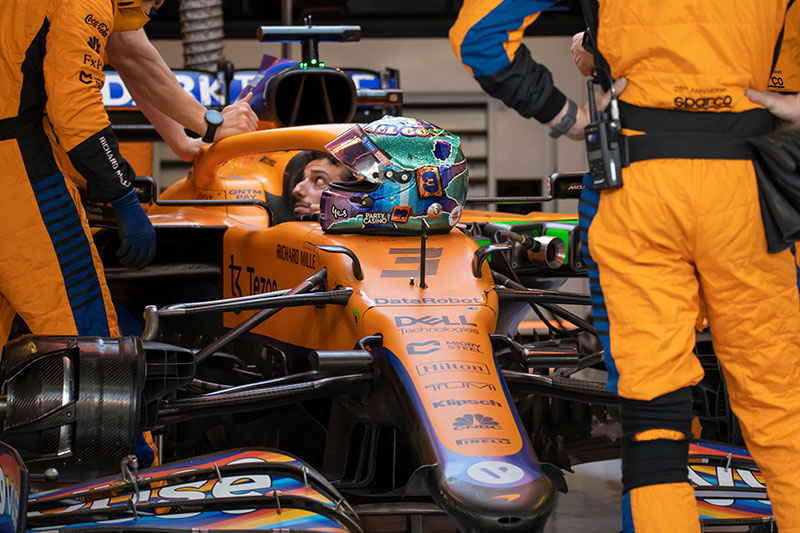