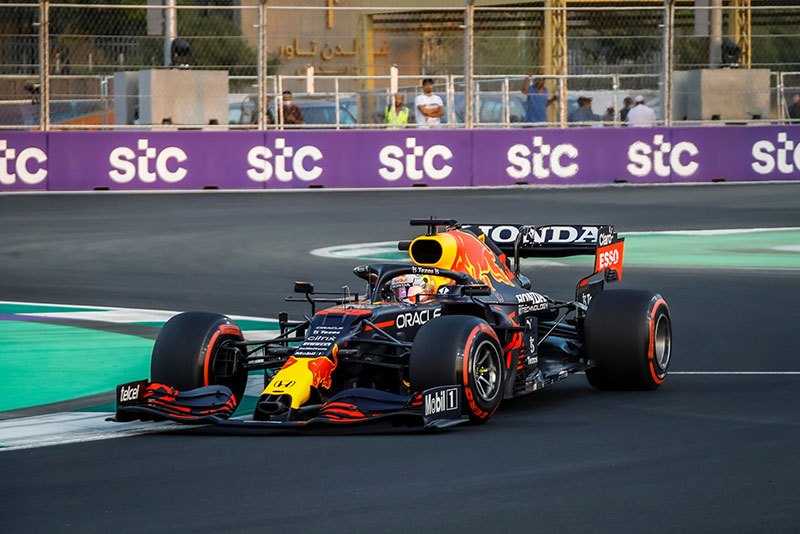 “I always consider it a positive when you are a talking point in F1.”

“I would say he is probably now the most popular driver on the grid – worldwide.”(Helmut Marko)

Verstappen’s meteoric rise from Karting to Formula One in just 2 years, has made him the subject of hype and criticism in almost equal measure. To highlight his precociousness, he had already competed in Formula One for more than half a season – before obtaining a road driver’s licence on his 18th birthday. Young and inexperienced he may be; but if he can garner some control, to accompany his fearlessness; the future looks incredible.

2006: He won the Belgian Karting Championship competing in the Rotax Max Minimax Class. For several years he then won nearly every race that he entered.

2014: Competed in the Florida Winter Series, achieving 2 wins and 5 podiums.
Verstappen then came 3rd in the FIA European F3 championship and also won the Zandvoort Masters. In August, he joined Red Bull’s junior driver programme, after considering an offer from Mercedes. His first free practice was at the Japanese Grand Prix when he became the youngest driver to take part in a Grand Prix weekend.

At just 16 Red Bull Junior Team boss Helmut Marko likened him to Senna – “Mostly like Ayrton Senna. He is an exceptional talent that comes along only once in decades.”

2015: In January the FIA launched a new super licence system for Formula One – raising the age limit to 18 from 2016 onward. Verstappen joined a year before this restriction and because of this new rule; his record of youngest participant is now unlikely to be beaten.

Formula One: Didn’t score a podium in his debut season – but definitely made an impression! His best results were 4th place in Hungary and the US. This season will also be remembered for his spectacular crash at Monaco; which he was lucky to walk away from. After clipping the back of Romain Grosjean’s car he smashed head on into the barrier at a high speed, prompting Felipe Massa to describe him as ‘dangerous’. By the end of the season he’d earned 22 more points than any other newcomer. At the FIA awards he won: Rookie of the Year, Personality of the Year and Action of the Year.

2016: 4 races into the season team bosses chose him to race for Red Bull – replacing Daniil Kvyat. He has achieved 4 podiums so far, including a win in Spain. With Hamilton and Rosberg crashing out at the Spanish Grand Prix, Verstappen seized the opportunity to take his first win in an incredible race.

His over exuberance at the Belgian Grand Prix caused some controversy. With Raikkonen stating that the young Dutchman ‘was going to cause a huge accident sooner or later.’ He received a ‘gentle warning’ from Charlie Whiting regarding his aggressive driving. 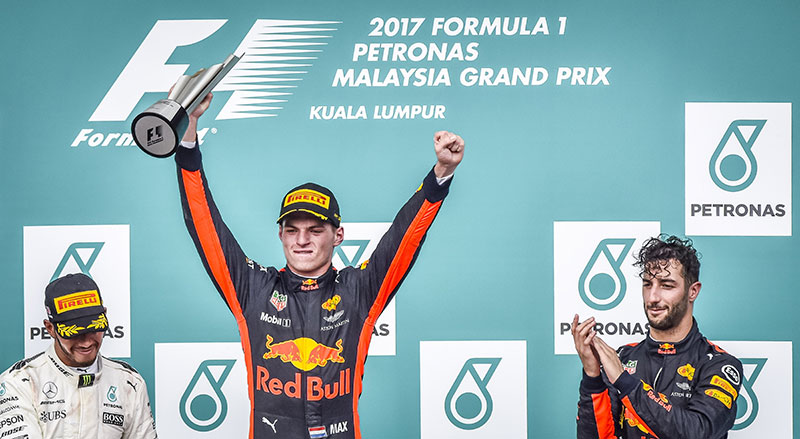 At the Russian Grand Prix in May, after rivals Hamilton and Rosberg crashed out on the opening lap – Verstappen found himself in 2nd place behind teammate Ricciardo. Verstappen’s 2-stop strategy proved more successful than Ricciardo’s 3-stop and the Dutchman took the lead, holding off Raikkonen at the end to become the youngest Formula One race winner – aged 18 years and 228 days.

In Belgium, Raikkonen warned that Verstappen ‘was going to cause a huge accident sooner or later’ after he had collided with Raikkonen at the first corner, pushed Vettel, Raikkonen and Perez wide and dramatically blocked Raikkonen on the Kemmel straight. Red Bull boss Christian Horner believed he would learn from this, but Verstappen was later called in by Formula One director Charlie Whiting to discuss his aggressive driving.

At the Brazilian Grand Prix, rain created problems on the track and also prompted a tyre change for Verstappen that left him running in 16th with just 15 laps remaining. He then made multiple overtakes to finish in 3rd. Horner said it was ‘one of the best drives I’ve seen in Formula One.’ Vettel complained that he had forced him off the track, but the FIA did not believe a punishment was necessary.

Not the best season for consistency. Over the first 14 races Verstappen suffered 7 retirements: 4 with mechanical issues and 3 with collisions in Spain, Austria and Singapore. But he also managed 12 top 5 finishes and the races he did complete were all ‘in the points’ of the top 10. 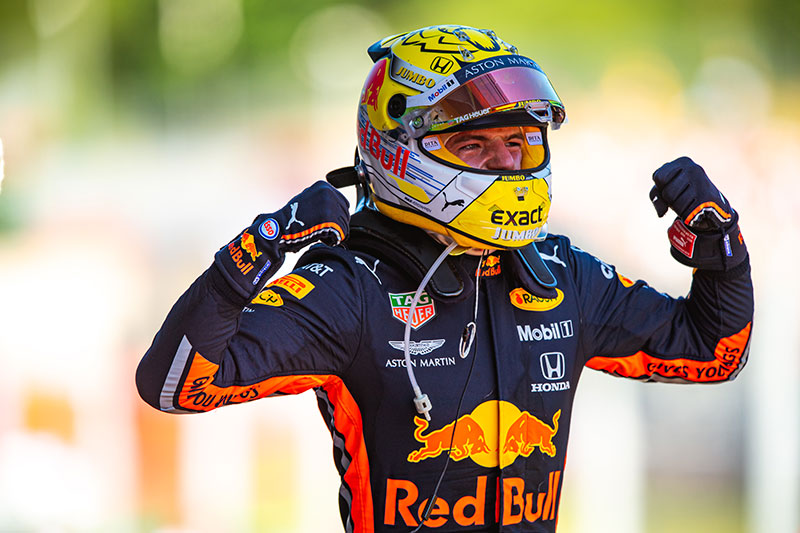 The first 6 races each saw Verstappen involved in an ‘incident’. Often, it was his reckless attempts at overtaking that saw him collide with other drivers.

But then Verstappen took Red Bull’s first Grand Prix win at home in Austria. And during the second half of the season Verstappen appeared to be learning from previous mistakes – as he achieved podium finishes in Belgium, Singapore, Japan and the US.

He then won in Mexico, after being visibly upset at missing out on his first pole position – and the record of the youngest ever pole-sitter.

Verstappen seemed on course to win in Brazil, until he collided with Esteban Ocon. This time it was Ocon, not Verstappen who was blamed for the collision and the Frenchman received a 10 second ‘stop and go’ penalty. Verstappen was given 2 days of ‘public service’ for pushing Ocon during an argument after the race.

At the Australian Grand Prix Verstappen finished 3rd, becoming the first driver to achieve a podium in a Honda-powered car since the British Grand Prix in 2008.

Verstappen received a penalty in Monaco after being ‘released into the path of Bottas’ during a pit stop. The penalty took him from 2nd to 4th.

Another victory in Austria, a win in the rain at the German Grand Prix and his first pole (converted to a 2nd place finish) in Hungary helped to create such a successful - first half of the season - that it made him an outsider for the championship.

At qualifying in Mexico, Verstappen was handed a grid penalty for ignoring yellow flags after Bottas’ crash and after a puncture he fell to the back – but he fought back to finish 6th.

Verstappen finished the season strongly with his second pole and a win in Brazil – and 2nd place in Abu Dhabi. He finished 3rd in the championship for the first time, with 278 points.

2020: ‘Impressive in a challenging year’

Verstappen signed a contract extension with Red Bull until the end of 2023.

He started in 2nd at the Austrian Grand Prix but retired early following an electronic issue on the power unit. Honda made the appropriate adjustments.

In Hungary, Verstappen crashed on the starting grid (conditions were wet) but managed to get his car back to the mechanics for them to fix the suspension before the start of the race. He eventually finished an impressive 2nd.

And there was more controversy during the free practice at the Portuguese Grand Prix after a collision between Verstappen and Lance Stroll led to the Dutchman using inappropriate language to berate Stroll over the radio. No action was taken by the FIA.

In Monaco a driveshaft failure with Leclerc’s Ferrari (in pole) meant that he couldn’t start the race, putting 2nd place Verstappen in front – which he held on to for the win. This win in Monaco also put him ahead in the Driver’s Championship for the first time that season – by 4 points.

Verstappen led the Azerbaijan Grand Prix from an early/speedy pit until Lap 46 when a tyre failure forced him to retire. Hamilton couldn’t capitalise on this – after a mistake at the restart put him in last place.

At the British Grand Prix, Hamilton and Verstappen collided on the 1st lap. Verstappen was taken to the medical centre, then hospital as a precaution. Hamilton won. Further increasing tension between the two.

The championship lead swung between Hamilton and Verstappen throughout one of the closest Formula One battles we have seen for some time. And in Mexico, with 4 races to go, it looked as though Verstappen had it won. Until Hamilton won the next 3 races – setting up a ‘winner takes all’ finale in Abu Dhabi.

At the final race and title decider in Abu Dhabi there was an early dispute as Hamilton ran wide to avoid colliding with Verstappen - but retained the lead – Red Bull complained, but the FIA said that any advantage gain had been corrected.

Hamilton looked set for the win - Verstappen was running more than 10 seconds behind him – until a late safety car came out following Nicholas Latifi’s crash. The withdrawal of this safety car has caused A LOT of controversy – as it effectively handed Verstappen the World Championship.

But with 10 wins and 18 podiums – no one can dispute that Verstappen was a worthy champion. Especially if you can separate ‘the period after the final safety car’ from the rest of the season.