A FORMULA ONE HISTORY: FERRARI

The most famous formula one team in the world! 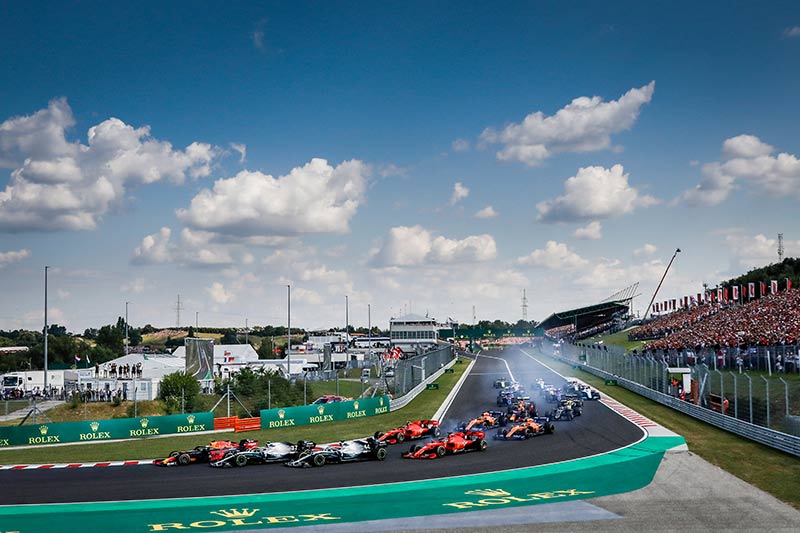 Scuderia Ferrari are the oldest Formula One team still competing – they have competed in every World Championship since its inception in 1950.

For their supporters – the Tifosi – following them is close to religion. Tifosi translated from Italian literally means ‘those infected by typhus’ – or acting in a fevered manner. In Ferrari colours, their supporters are like no other in the sport – the frantic sea of red - a beautiful sight across the Formula One grandstands.

The drivers racing for Ferrari’s 2022 season are Charles Leclerc and Carlos Sainz Jr. And so far, they’re doing rather well!

Scuderia Ferrari was founded by Enzo Ferrari in 1929, initially for Alfa Romeo racing. Its purpose was to enter amateur drivers in a variety of races – and at its peak the team included over 40 drivers. Enzo Ferrari himself also raced during the early years.

In 1933, when Alfa Romeo’s financial difficulties forced them to withdraw their in-house team from racing - Ferrari became their acting racing team.

In 1939 Enzo left Alfa Romeo and founded Auto Avuto Costruzioni Ferrari (they also manufactured machine tools) and began to work on his own car: The Tipo 815.

In May 1947, Ferrari created the Tipo 125 – the first racing car under the Ferrari name.

1950: Ferrari did not enter the first ever Formula One World Championship race at the British Grand Prix in 1950 - after a dispute with the organisers over the ‘start money’ paid to entrants. Instead, the team first raced at the Monaco Grand Prix that year.

1953: Ascari won 5 races and his 2nd (and consecutive) World Championship.

1954: The Ferrari Tipo 625 couldn’t compete with Maserati and the brilliant Juan Manuel Fangio. They only achieved 2 race wins this year.

1956: Juan Manuel Fangio joined Ferrari after his team Mercedez-Benz withdrew from the sport – winning the Drivers’ Championship at the end of the season.

Ascari died tragically while test-driving a Ferrari 750 Monza sports car at Monza. In an eerie coincidence he died at the same age and in very similar circumstances to his father Antonio – also a famous racing driver - who died in a crash at the 1925 French Grand Prix.

1957: This proved an even worse year for Ferrari. Driver Eugenio Castellotti died at the Modena Autodrome test-driving a new Ferrari and teammate Alfonso de Portago crashed into a crowd at Mille Miglia - killing himself and 12 spectators – for which Ferrari were later charged with manslaughter.

1958: All 3 Ferrari drivers were killed this year. Peter Collins died at the German Grand Prix and Luigi Musso died at the French Grand Prix. Mike Hawthorn won the Drivers’ Championship and retired from the sport – but months later died in a road accident.

1961: Another year mixed with tragedy and success. Wolfgang von Trips died after a crash at the Italian Grand Prix, killing at least 12 in the crowd. Phil Hill won the Drivers’ Championship, and the team won the Constructors’ Championship.

1967: Another difficult year for Ferrari. Lorenzo Bandini was seriously injured when he crashed at the Monaco Grand Prix and was trapped in the burning car – he died days later. Teammate Mike Parkes suffered a career-ending injury at the Belgian Grand Prix.

1969: Enzo Ferrari attempted to revive his struggling team using the money earned from selling his road car business to Fiat for a reported $11 million.

1974: The team signed Niki Lauda and decided to concentrate on Formula One – pulling out of competing in other racing competitions. Things soon began to improve, as Clay Regazzoni was just pipped to the World Championship title by Emerson Fittipaldi at the USA Grand Prix season finale.

1976: Lauda was seriously injured when his car burst into flames at the German Grand Prix. Lauda suffered severe burns and inhaled toxic fumes but was miraculously racing again 6 weeks later at the Italian Grand Prix. He managed to score points in 2 races before the end of the season and only lost the title - to James Hunt - by one point.

1981: Ferrari introduced a turbo-charged engine – but struggled with a difficult car. Despite this, Gilles Villeneuve won the Monaco and Spanish Grand Prixs. Ferrari made sure that they learned from/improved this ‘difficult car’ and the 1982 car was a vast improvement.

1982: Another tragic year. Enzo Ferrari’s favourite Villeneuve died after a crash in qualifying at the Belgian Grand Prix. And Didier Pironi suffered career-ending injuries just before the German Grand Prix.

1988: Enzo Ferrari died. Gerhard Berger and Michele Alboreto scored an historic 1-2 at the Italian Grand Prix – the only win this season for a team other than McLaren-Honda.

1989: The end of the turbo-charging era in Formula One. Nigel Mansell joined the team – winning his debut race for them at the Brazilian Grand Prix – but his spell at Ferrari was short-lived and he was to leave the following year. 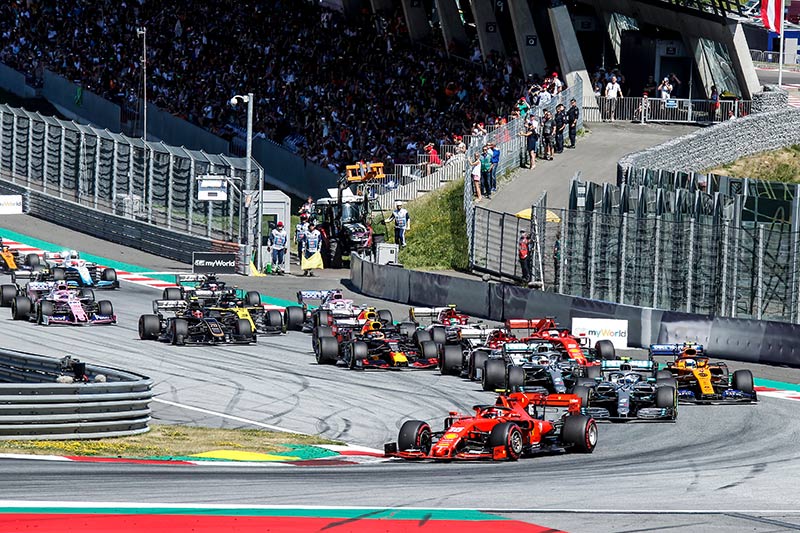 1990: Alain Prost joined the team and (much to Mansell’s dismay) became the lead driver. Prost was just beaten to the World Championship by Ayrton Senna following the controversial Japanese Grand Prix. Mansell returned to Williams at the end of the season.

1991: With their V12 engine no longer competitive – now that other teams had introduced smaller, lighter and more efficient V10s – Ferrari had to rethink. Prost failed to win a race (but did get on the podium 5 times) and complained that his car was harder to driver ‘than a truck’ – he was ‘let go’ before the end of the season. Ferrari achieved no wins between 1991-93.

1996: Ferrari switched to the V10 for 1996. Despite poor reliability, their new recruit Michael Schumacher won 3 races with the F310.

1998: Schumacher and teammate Eddie Irvine scored a 1-2 at Monza. Schumacher lost out on the World title to Mika Hakkinen at Suzuka, finishing 2nd in the Drivers’ Championship.

1999: Ferrari won 3 out of the first 4 races. Then Schumacher crashed at the British Grand Prix, breaking his right leg – and missing the next 6 races. He was replaced by Mika Salo.

Eddie Irvine became the main contender for the title – but (also) lost out to Mika Hakkinen by 2 points at the final race in Japan. Ferrari won their first Constructors’ Championship since 1983.

2001: A win at the Belgian Grand Prix saw Schumacher achieve a (then) record 52nd Grand Prix victory. He won his 2nd Drivers’ Championship, with Ferrari taking a 3rd consecutive Constructors’ Championship. In remembrance of the victims of 9/11 – Ferrari painted the nosecones of their cars black.

2002: After coming 1st or 2nd in every race this season (except for the Malaysian Grand Prix where he came 3rd) Schumacher achieved his 5th World Championship title (matching Juan Manuel Fangio’s record) at the French Grand Prix.

In Austria – Barrichello was order by Ferrari to give way to Schumacher for the win. Schumacher, embarrassed after the race, pushed Barrichello to the top of the podium and Ferrari were fined $1 million for ‘interfering’ with podium procedures. 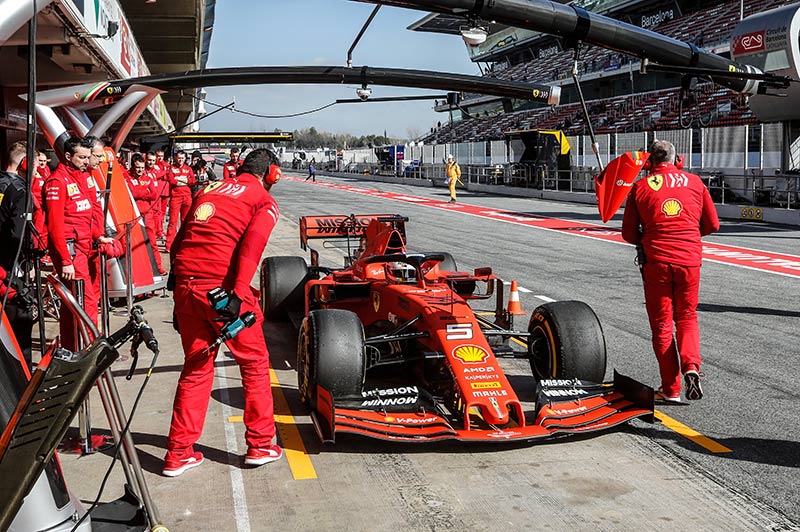 2003: Schumacher started 14th and finished 8th at the Japanese Grand Prix – winning the Drivers’ Championship over teammate Barrichello by just 2 points. In doing so, he became a Formula One record breaker with a 6th World Championship title. Ferrari won their 13th Constructors’ Championship. Team orders were officially banned in Formula One.

2004: Schumacher won 13 of the 18 races this season, 12 out of the first 13. Both records. He won his 7th (and final) Drivers’ Championship and Ferrari took another Constructors’ Championship.

2005: The F2004M lacked pace when compared with McLaren and Renault’s new cars. Consequently, the new F2005 (due at the Spanish Grand Prix) was rushed in for the Bahrain Grand Prix – and Schumacher suffered his first retirement since 2001 (58 races) with a hydraulics failure. He would leave Ferrari the following year.

2007: Kimi Raikkonen joined Ferrari and won on his debut at the first race of the season in Australia. The first Ferrari driver to do so since Nigel Mansell in 1989. Raikkonen went on to win the Drivers’ Championship with 9 race wins. Ferrari won yet another Constructors’ Championship.

2008: Ferrari won their most recent (to date) Constructors’ Championship. The team issued a statement saying that they were considering their future in Formula One due to the FIA wanting to standardise the engines from 2010. This standardisation never happened.

2009: Ferrari’s worst start to a season since 1981. When Felipe Massa was injured by a detached spring, former Ferrari driver Schumacher was lined up to replace him – but a motorbike injury that he suffered earlier in the year prevented this from happening.

2012: Alonso 2nd in the Drivers’ Championship for the second year running.

2015: After a management overhaul at Ferrari – the season started well. Sebastian Vettel finished 3rd in the Drivers’ Championship, with teammate Kimi Raikkonen 4th.

2017: Ferrari took their 225th Formula One victory at the Australian Grand Prix with Vettel. Vettel hadn’t won a race since 2015 in Singapore and was now fighting for the title. Ferrari achieved a 1-2 finish in Monaco and Hungary. Lewis Hamilton pipped Vettel to the World Championship title.

2019: Raikkonen was replaced by Charles Leclerc, who now partnered Sebastian Vettel. Leclerc took his first ever Formula One win at the Belgian Grand Prix. Singapore saw a Ferrari 1-2 – Vettel taking the win, with Leclerc 2nd.

2020: Ferrari finished 6th in the Constructors’ Championship. Their worst finish since 1980.

2021: Carlos Sainz Jr replaced Vettel. Ferrari introduced a new car: the Ferrari SF21. This was comprised of the 2020F SF1000 chassis, with an improved aerodynamic design with less drag and more horsepower.

2022: This car has seemingly ushered in a new era for Ferrari. The team have taken 5 podiums during the first 3 races. Charles Leclerc with 2 wins, sits proudly at the top of the Drivers’ Championship. There are still 20 races to go - but it promises to be an exciting season!