Regularly a ‘points finisher’, he has just begun his 5th Formula One season in a car that finally appears to match his skill. Watch this space! 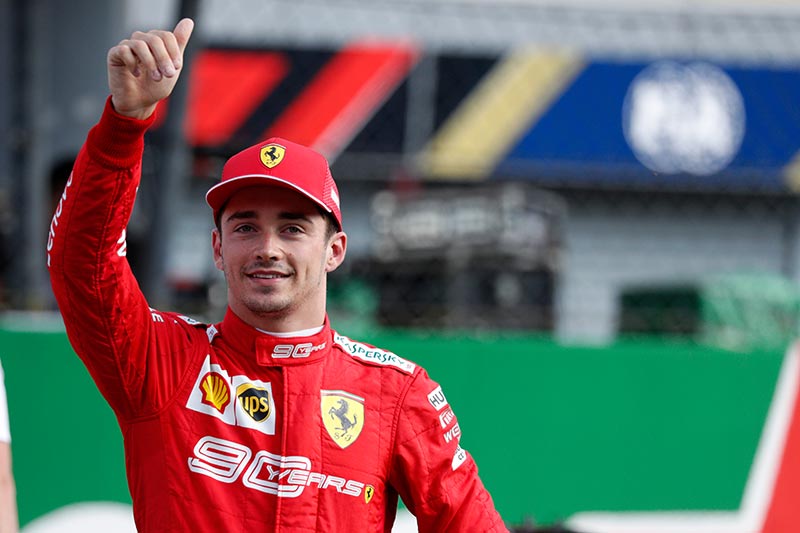 The 2018 season saw Charles Leclerc’s debut in Formula One, making him the first Monegasque driver to race in the competition since Olivier Beretta in 1994. Leclerc made further Monegasque history when he finished 6th in Azerbaijan – becoming the 2nd Monegasque driver to finish in the points since Louis Chiron came 3rd at the Monaco Grand Prix in 1950.

Unfortunately, when it came to the Monaco Grand Prix Leclerc suffered a brake failure, causing him to crash into the back of Brendon Hartley – forcing both cars to retire.

After this disappointment, Leclerc managed three consecutive points finishes, followed by five races with no points: three of these were retirements – including a multi-car pile-up in Belgian caused by Nico Hulkenberg. The final three races of the season saw Leclerc finish in the top 7. 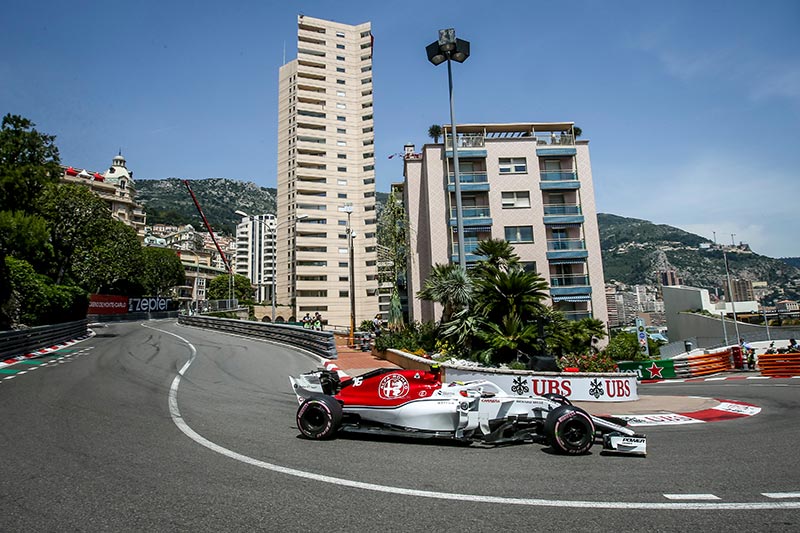 Leclerc signed for Ferrari in 2019. A few days later, evidently impressed by what they saw, it was announced by Maurizio Arrivabene (team principal) that the contract would continue until at least 2022.

The first race of the season in Australia, Leclerc started and finished in 5th.

At the following race in Bahrain he achieved his first Formula One pole – becoming the youngest Ferrari pole-sitter and setting a new track record in the process. Leclerc led for most of the race – before engine trouble dropped him to 3rd. His first podium!

In China, Leclerc qualified behind Vettel in 4th and overtook his teammate at the start – but was asked by the team to let Vettel pass – and eventually finished 5th.

Monaco was the scene of another disappointment - for the second year in a row - as Leclerc started a poor 15th, suffered a puncture/floor damage after trying (and failing) to pass Hulkenberg and was forced to retire.

Races in Canada and France saw an improvement with two 3rd place finishes. Leclerc achieved another pole in Austria and led for the majority of the race before a collision with Verstappen dropped him to 2nd. No action was taken following the incident.

At the British Grand Prix, Leclerc qualified and finished 3rd. His 4th consecutive podium. He was also voted the ‘Driver of the Day’ for his sterling efforts in keeping Verstappen at bay.

The German Grand Prix saw Leclerc qualify 10th after a fuel system issue meant he couldn’t set a lap time in Qualifying 3. He drove an excellent (rain-soaked) race making it up to 4th in the early stages. But Ferrari’s decision to fit soft tyres contributed to him losing control and crashing into the barriers on Lap 29 - forcing another retirement.

Belgium saw another pole added to Leclerc’s record (teammate Vettel started in 2nd) and this time it was converted into a win. Leclerc’s first win!

The Italian Grand Prix saw another pole and another win. Yet another pole in Singapore – and a 2nd place finish.

Leclerc started in pole in Russia, Vettel passed him at the first corner before Ferrari allowed Leclerc to retake the lead – he finished in 3rd.

Japan saw Leclerc qualify in 2nd, before damaging his car on the first lap after a collision with Verstappen and finishing 6th – his worst finish this season.

In Mexico, Leclerc found himself in pole again after pole-sitter Verstappen was given a grid penalty. Leclerc eventually finished 4th.

At the penultimate race in Brazil a (controversial) collision between Leclerc and teammate Vettel forced them both to retire.

Leclerc finished 4th in the Drivers’ Championship after an excellent season in which he achieved 7 poles, 264 points, 4 fastest and the Pole Trophy. He also became the first Monegasque driver to win a Formula One Grand Prix – Louis Chiron had only won grand prixs before the inaugural championship in 1950. 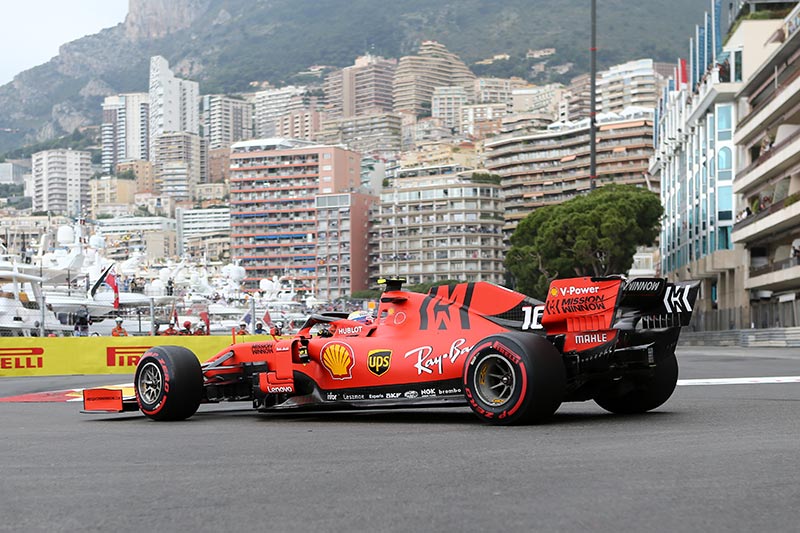 The Formula One calendar received a shake-up due to the Covid-19 pandemic – making the first race of the season in Austria on 5th July. Leclerc qualified in 7th and Ferrari struggled with pace – it was only the chaotic nature of the race that assisted him in finishing an impressive 2nd.

Before the Styrian Grand Prix the following weekend - Leclerc was investigated for breaking Covid Safety Protocol after posts on social media showed him socialising with his girlfriend, friends and fans – ie people not in his ‘bubble.’ Leclerc denied that he had broken any rules - but was given a warning.

The race weekend wasn’t much better, he finished 11th in qualifying and was demoted to 14th after receiving a 3-place penalty for ‘impeding’ Daniil Kvyat. During the race Leclerc collided with Vettel on the first lap causing both drivers to retire. This time Leclerc accepted responsibility for the crash“I’ve been a total asshole.”

At the British Grand Prix in August, Leclerc qualified in 4th and finished on the podium in 3rd.

A week later at the 70th Anniversary Grand Prix he qualified 8th, before a successful one-stop strategy left him with a 4th place finish. Leclerc didn’t ‘take the knee’ in support of the Black Lives Matter before the race - and angrily denied that he was a racist - suggesting it was the political nature of the movement that he was avoiding supporting.

He qualified a disappointing 13th at the Italian Grand Prix - but made his way up the grid to 4th before crashing out on Lap 24. A red flag followed.

Leclerc would probably rather forget the two races in Bahrain: he finished 10th in the first race (Bahrain Grand Prix) and retired at the second race (Sakhir Grand Prix) after colliding with Perez on the first lap.

The last race of the season brought further frustration for Ferrari as they both struggled with pace and failed to finish in the points: Leclerc 13th and Vettel 14th.

Leclerc finished 8th in the Drivers’ Championship with 98 points – after the high of the previous season this must have been disappointing. 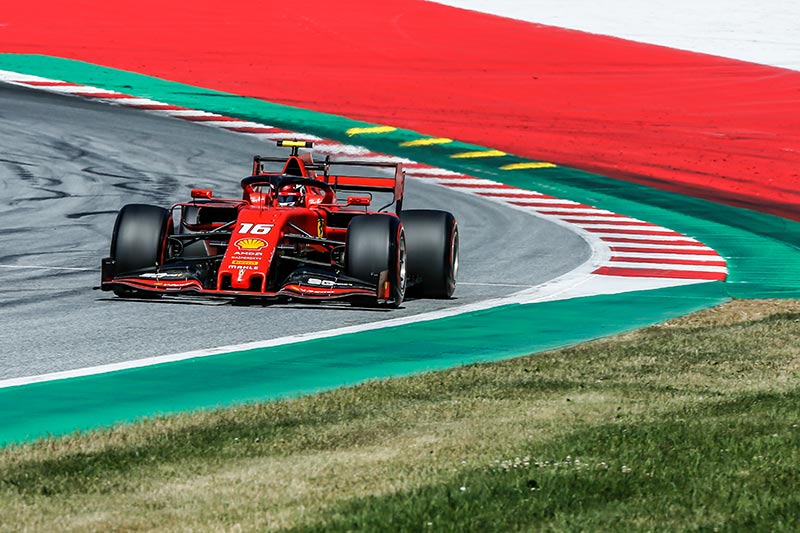 Leclerc’s contract was extended until 2024 and he got a new teammate in the shape of Carlos Sainz Jr.

The first race of the season in Bahrain saw Leclerc qualify in 4th and finish the race in 6th. The following race at the Emilia Romagna Grand Prix he started and finished in 4th place.

Is Leclerc destined never to succeed at home in Monaco? He qualified promisingly in pole (despite crashing in Q3) but failed to even start the race after a driveshaft issue on the way to the grid.

At the British Grand Prix Leclerc qualified in 4th – but after Verstappen and Hamilton collided - Leclerc passed Bottas on the 1st lap for the lead. This is where he stayed, until, with two laps remaining Hamilton caught up with and overtook him. Leclerc had to make do with 2nd. His one and only podium of 2021.

He did not finish in Hungary after being hit by Lance Stroll. Russia (in heavy rain) was also disappointing: Leclerc started in 19th, fought his way up to the top 5 before falling back to finish in 15th.

The last race in Abu Dhabi saw Leclerc finish 10th, with teammate Sainz Jr in 3rd – this result put Sainz Jr 5th in the Drivers’ Championship dropping Leclerc to 7th. This was the first time in his career that he had been beaten by a teammate.

A new and much improved car has seen Leclerc emerge as a real championship contender. To date he has won the first race in Bahrain and taken 2nd in Saudi Arabia. We look forward to witnessing Leclerc battle World Champion Max Verstappen for the rest of the season! 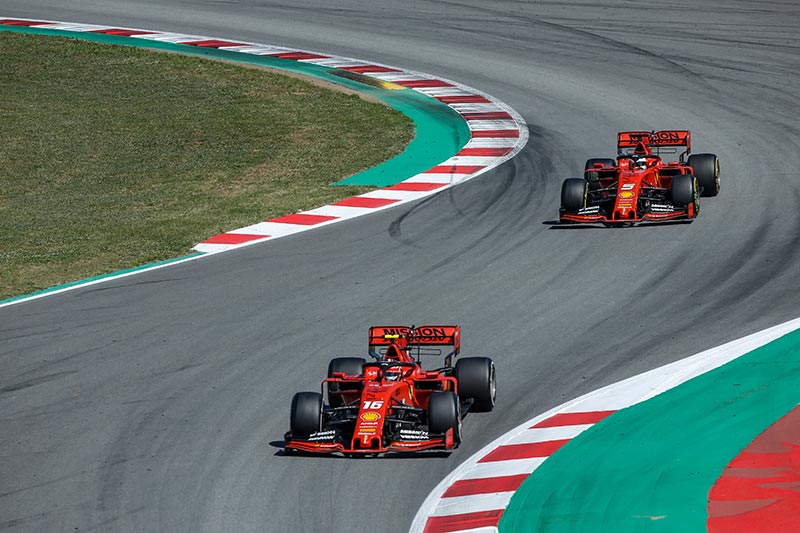