Carlos Sainz Jr was born in Madrid into a racing family – his father Carlos Sainz was a legendary World Rally Champion (twice) and his uncle Antonio also a rally driver.

Nicknamed ‘chilli’, Sainz followed the well-trodden path of a Formula One driver by starting his career with karting.

He has always had the boldness to test his car to its limits, but with time and experience has found a greater consistency.

An intelligent, instinctive driver - we are watching him emerge into one of the greats. 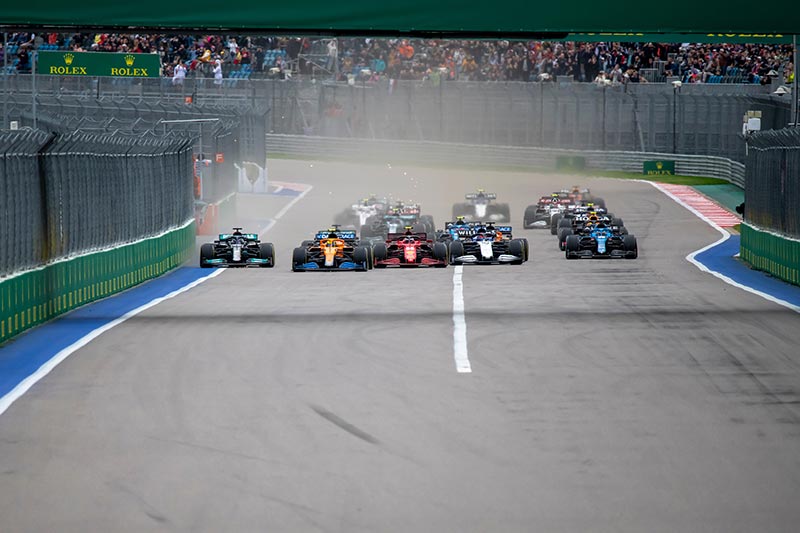 On his debut at the first race of the season in Australia he qualified and finished inside the top 10.

At the Spanish Grand Prix he achieved his best qualifying position of the year – starting in 5th on the grid and finishing the race 9th.

In Monaco, Sainz started the race from the pit lane (following a penalty for failing to attend the weigh bridge during qualifying) but managed to finish in 10th and just inside the points.

Four consecutive retirements followed: an electrical failure at the Austrian and British Grand Prix, a fuel pressure issue in Hungary and a power unit failure in Belgium.

In practice at the Russian Grand Prix, Sainz crashed into the barriers at 150km/ph – requiring an overnight stay in hospital.

After another crash in qualifying at the USA Grand Prix Sainz produced a great comeback to start from last place on the grid – and finish 7th.

At the season opener in Australia, Sainz qualified in 7th and finished 9th.

After the Russian Grand Prix, teammate Max Verstappen was promoted to Red Bull, with Daniil Kvyat returning to Toro Rosso.

Three points finishes in Spain, Monaco and Canada followed. A 6th place at the Spanish Grand Prix was – at this point – the best result of Sainz’s Formula One career.

Sainz retired with a suspension problem at the European Grand Prix, but then finished in the points at the next three races.

Six races without a point followed: in Germany, Belgium (retired), Italy, Singapore, Malaysia and Japan - until 6th place in USA.

At the Brazilian Grand Prix, Sainz started in 15th and finished an impressive 6th.

In Abu Dhabi, the season finale, he retired due to a collision with Jolyon Palmer.

Sainz finished the season in 12th. Scoring 46 out of Toro Rosso’s 63 points. 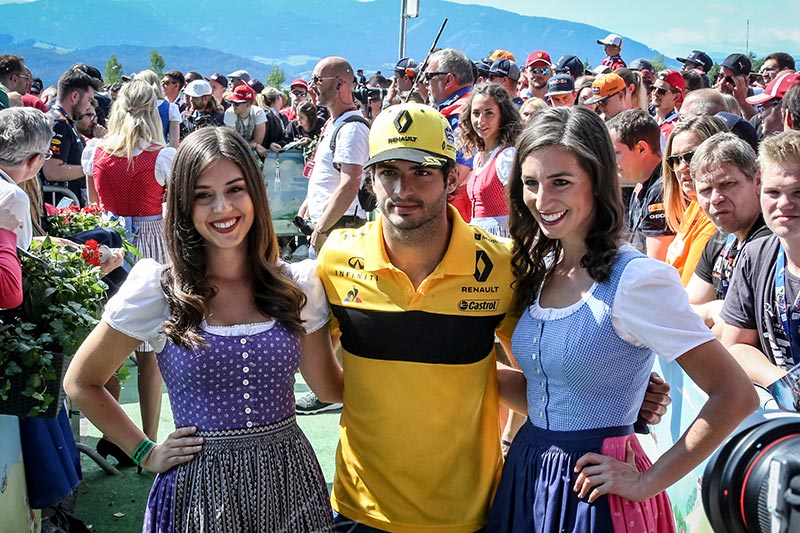 Sainz suffered his 3rd retirement at the Bahrain Grand Prix in as many years – this time caused by a collision with Lance Stroll. Both drivers blamed each other, but it was Carlos Sainz who received a grid penalty for the next race in Russia.

Another penalty and another retirement following a collision with Romain Grosjean and Felipe Massa at the Canadian Grand Prix.

By the Austrian Grand Prix, Sainz hinted that he wouldn’t stay with the team for another year. But Team Principal Christian Horner denied that there was any truth in this.

Sainz collided with teammate Kvyat on the first lap of the British Grand Prix – putting him out of the race. Kvyat finished 15th.

In Singapore a 4th place finish saw ‘his best day in Formula One.’

After Kvyat was dropped by Toro Rosso, Pierre Gasly became Sainz’s new teammate for the Malaysian Grand Prix. Gasly finished the race in 14th - Sainz did not finish.

Another retirement was to follow in Japan before Sainz moved to Renault for the final 4 races of the season. Nico Hulkenberg became his new teammate.

He started and finished 7th at the USA Grand Prix. Mexico started well – Sainz made his way from 8th to 5th – but a spin and subsequent pit for new tyres dropped him back until he finally retired with steering problems.

Sainz finished outside the points in 11th in Brazil, then suffered another retirement at the final race in Abu Dhabi.

Sainz scored points in all but one (Bahrain 11th place) of the first eight races. He also qualified in the top ten in all eight.

The Monaco Grand Prix was labelled a ‘disaster’ due to a Renault tyre strategy that was responsible for Sainz starting 8th and finishing 10th.

Sainz ran in 6th for most of the French Grand Prix – but dropped to 8th after an MGU-K failure.

A crash with Romain Grosjean at the British Grand Prix was one of only two retirements this season - quite dramatically reduced from eight the previous year. But the penalties and crashes were still fairly regular.

Sainz received a penalty at the German Grand Prix for overtaking during the safety car. He eventually finished the race a disappointing 12th.

Five out of seven races in the points followed. His best result – a 5th place in Hungary.

A crash with Sergey Sirotkin on Lap 1 in Russia damaged his car and he eventually finished 17th. And in Mexico Sainz retired with battery issues.

The finale in Abu Dhabi saw a decent drive as he made it from an 11th place start to finish 6th.

Sainz finished the season three places behind teammate Nico Hulkenberg, scoring less than half (53) of Renault’s 122 points. But his consistency had markedly improved – he scored points in 13 out of the 19 races that he finished. 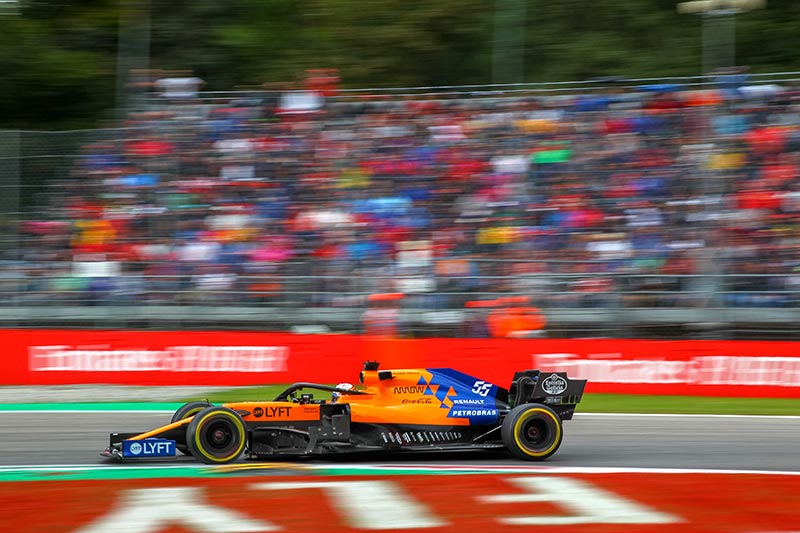 Sainz moved to McLaren for the 2019 season – replacing Fernando Alonso and gaining a rookie teammate in Lando Norris.

He didn’t have the best start. An engine fire in Australia forced him to retire and he suffered 1st lap collisions in Bahrain and China that left him finishing outside the points.

Sainz then scored points in 8 out of the next 9 races - just outside with 11th in Canada. He was also often the highest-placed driver not driving for one of the top 3 teams: Mercedes, Ferrari or Red Bull.

An 18th place start in Austria was impressively converted into an 8th place finish. Sainz span on track at the German Grand Prix – but still managed to finish 5th.

Two retirements followed. In Belgium with power issues and Italy after an incorrect wheel was fitted during a pit error.

At the Singapore Grand Prix a collision with Hulkenberg and a delayed pit meant that Sainz eventually finished outside the points.

The Brazilian Grand Prix was an epic drive. Sainz had started in 20th (and last) after an issue with the engine in qualifying. He made his way up to 5th, then 4th after Alexander Albon spun following a collision with Lewis Hamilton. This became 3rd after Hamilton received a penalty for the incident. Sainz’s first podium!

At the finale in Abu Dhabi, he passed Hulkenberg on the last lap to finish 10th with a point – enough to put him 1 point ahead of Pierre Gasly and take 6th in the Drivers’ Championship.

Sainz’s achieved his best finish in the Championship. This season he scored 96 out of McLaren’s 145 total points. 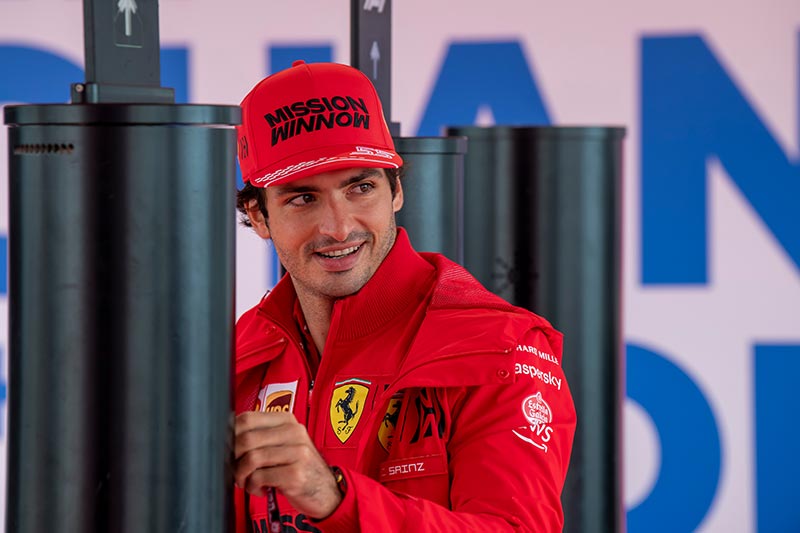 In a season considerably reduced by the COVID-19 pandemic – Sainz took 5th place at the first race in Austria.

At the next race – the Styrian Grand Prix – he achieved his best qualifying position with 3rd on the grid. Unfortunately, a pit delay assisted in dropping Sainz down to a 9th place finish. But he did manage to set his fastest lap in Formula One and in doing so a new Red Bull record.

At Silverstone, Sainz had been running in 4th with 2 laps to go – when a puncture forced him to retire. He was eventually classified 13th.

In the following race, the 70th Anniversary Grand Prix (also at Silverstone) Sainz had started outside the top ten - but was running in 4th when he entered the pits. Another slow pit undid all the excellent progress and he finished 13th. At ‘home’ in Spain – a 6th place finish.

At the Italian Grand Prix, Sainz qualified in 3rd behind both Mercedes but by the red flag for Charles Leclerc’s accident he was running in 6th.

He then passed 3 cars to return to 3rd place – which became 2nd after a Hamilton penalty and Sainz finished just 0.4 seconds behind race winner Gasly. His best ever result!

Two retirements followed at the Tuscan Grand Prix after a multiple pile-up at the start and a crash (into a wall) on the 1st lap of the Russian Grand Prix.

Seven points finishes followed. Sainz had been running in 1st in Portugal (after moving up 6 places in just 2 laps) but eventually finished 6th.

Two impressive comebacks followed. In Turkey, Sainz started in 15th following a penalty for impeding Sergio Perez in qualifying – but he gained an astonishing 6 places on the 1st lap to eventually finish 5th.

A similar thing happened in Bahrain (no longer his nemesis?) as he started in 15th (this time brake failure in qualifying) and finished in 5th.

Another 6th place finish in the Drivers’ Championship. This season Sainz scored 105 of McLaren’s 202 points.

At his first race for the team in Bahrain Sainz qualified in 8th and finished in 8th.

The Emilia Romagna Grand Prix saw another Sainz comeback as he started in 11th and finished 5th. Portugal saw the opposite after Ferrari ‘got it wrong’ with their strategy and Sainz started 5th, finishing 11th.

In Monaco, he achieved his first podium for Ferrari (3rd career podium) with 2nd place. This was partially assisted by a Leclerc DNS and Valtteri Bottas’ pit issue.

Difficulties with tyre-wear meant neither Ferrari scored points in France.

The Styrian Grand Prix saw another great comeback – as Sainz started in 12th and finished in 6th.

A collision with George Russell in qualifying at the British Grand Prix put Sainz at the back. But he recovered well enough in the subsequent sprint and eventually finished the race in 6th.

In Hungary, a crash in qualifying put him 15th on the starting grid. But he fought his way up to 4th, which became 3rd after Vettel’s disqualification, and he finished in 3rd. Another podium!

Sainz started a career-best 2nd on the grid in Russia, then took the lead from Lando Norris on Lap 1 – before finishing 3rd.

At the final (and controversial) race in Abu Dhabi Sainz achieved his 4th podium of the season. But later criticised the final lap restart (position behind the lapped cars) decision (as did many other) that nearly cost him his 3rd place.

Sainz finished the 2021 season with 164.5 points. An excellent start with Ferrari! 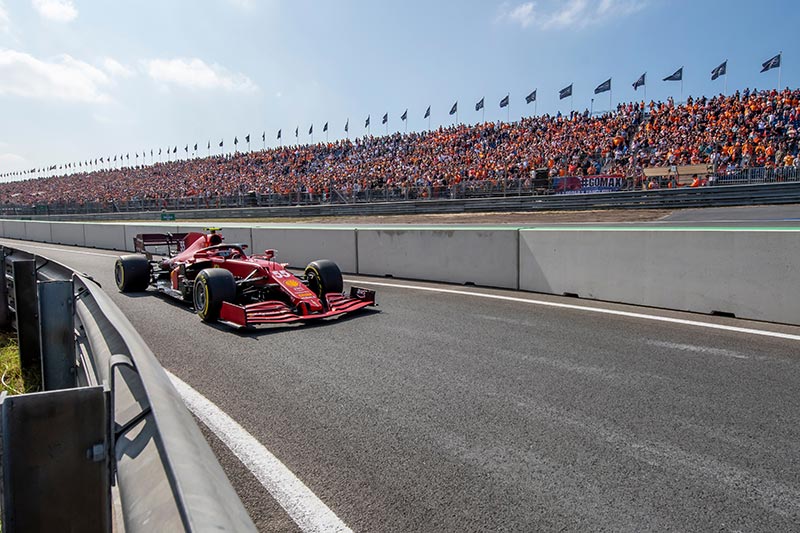