“Perfect is a good way to describe it. I said yesterday how much this place means to Ferrari. To have a race like we have today is unbelievable.” (Vettel) 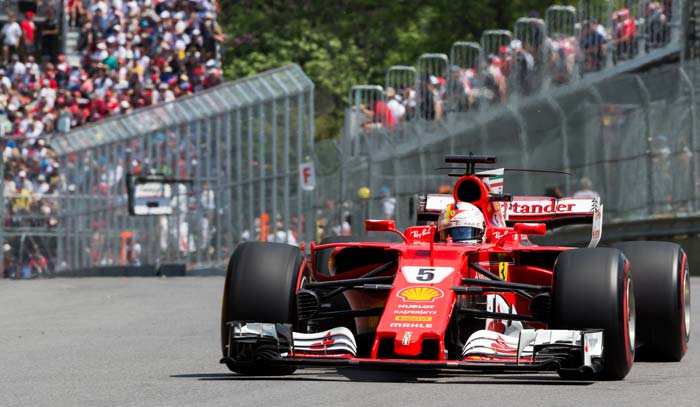 Sebastian Vettel achieved his 50th win and retook the lead in the World Championship, after dominating the race today in Montreal. In a bizarre display of ‘not paying attention to counting the laps’ the chequered flag was waved by model Winnie Harlow a lap early.

Vettel started in pole and led from the first corner, by Lap 10 having built a lead of 3.4 seconds; and was never seriously challenged by Bottas – who he kept at a safe distance.

Ferrari have the most wins here in Canada - with 14 - but they hadn’t won since 2004, making today’s win even more special.

Mercedes Bottas managed to hold off the challenge from Verstappen, despite struggling with a lack a fuel. But it couldn’t have been closer at the end – with just 0.9 seconds separating them at the finish line – and Verstappen had to make do with 3rd.

This circuit is a favourite of Lewis Hamilton’s, who has won here 6 times – but today was difficult. Hamilton had started in 4th, then struggled with his engine temperature early in the race, forcing him to pit before originally planned – so that Mercedes could add more cooling to the car. This allowed Ricciardo past and Hamilton dropped to 5th.

Hamilton successfully fended off a challenge from Raikkonen, despite having tyres 16 laps older. With 20 laps to go, Hamilton then set his sights on challenging Ricciardo – but was unable to pass him. Another good day for Red Bull, as they took 3rd and 4th.

A huge crash between Brendon Hartley and Lance Stroll brought out the safety car early in the race. Hartley had been trying to pass Stroll at Turn 5, edging him wide and causing him to slide and push Hartley’s Toro Rosso into the barriers – forcing the car into the air. Both cars careered off the track together. Stroll was unhurt, but Hartley was sent to hospital to be assessed – his ECG came back normal.

Alonso, in his 300th Grand Prix, had been on course for 10th place (and a point) but retired with a broken exhaust, with 30 laps to go. It was his 2nd retirement in a row, in a season where he had previously seen a positive improvement in form. Teammate Stoffel Vandoorne could only finish 16th in McLaren’s worst performance of the season – prompting questions of how successful their upgrades have been.

To add insult to injury, Renault finished 7th (Hulkenberg) and 8th (Sainz Jr) – taking important points in the battle with McLaren for 4th place in the Constructor’s Championship.

Yes, for the first time in 10 years, the Formula One Grand Prix comes to France – expect some tightly fought battles.

Our next great adventure is at the British Grand Prix on the 8th July 2018, we hope to see you there.