The Azerbaijan Grand Prix is a relatively new addition to the Formula One schedule - after its introduction in 2017.

In fact, it is the newest street circuit on the calendar. The perfect mix of open track leading into a tight and twisty maze – and back out again. Where spectators are seated right in the middle of the action: and treated to the beauty of Ichen Sheher old town and its medieval city walls.

Add to this experience the wonderful city of Baku itself - and this is a Grand Prix to add to your annual travel plans.

Described by Lonely Planet as ‘the architectural love child of Paris and Dubai’, Baku is the largest city on the Caspian Sea and the industrial, scientific and cultural centre of Azerbaijan. The name Baku is believed to have derived from the Persian for ‘wind-pounded city.’

Expect Iranian history, Soviet traces (Baku was under Soviet rule for much of the 20th century) and after a 2nd oil boom around 2006 – the city has embraced ultra-modern architecture.

TOP 5 THINGS TO SEE IN BAKU

1. Palace of the Shirvanshahs: Zamkovskaya Side-Street, 76, Icherisheher, Baku, Baku 1000
The seat of North-Eastern Azerbaijan’s ruling dynasty during the Middle Ages - after a devastating earthquake in Shamakhi forced Ibrahim I of Shirvan to move his capital to Baku. The palace is described by UNESCO as ‘one of the pearls of Azerbaijan’s architecture’ – and it is a breath-taking sight.
The palace is mostly 15th century and comprised of sandstone walls and domes. The complex includes a ceremonial courtyard, burial vaults, Seyid Yahya Bakuvi’s mausoleum, Murad’s gate, the shah’s mosque with a minaret and the remains of a bathhouse.
In 2000 the area that includes the palace complex, fortress walls and the Maiden’s Tower was named a World Heritage Site.
Spectacular views of the whole complex can be enjoyed without even entering the palace – from rooftop café Floors or from Artim’s ‘secret’ rooftop. And there are many photo opportunities where you can include the contrastingly modern Flame Towers in the background. Open every day between 10am-6pm. 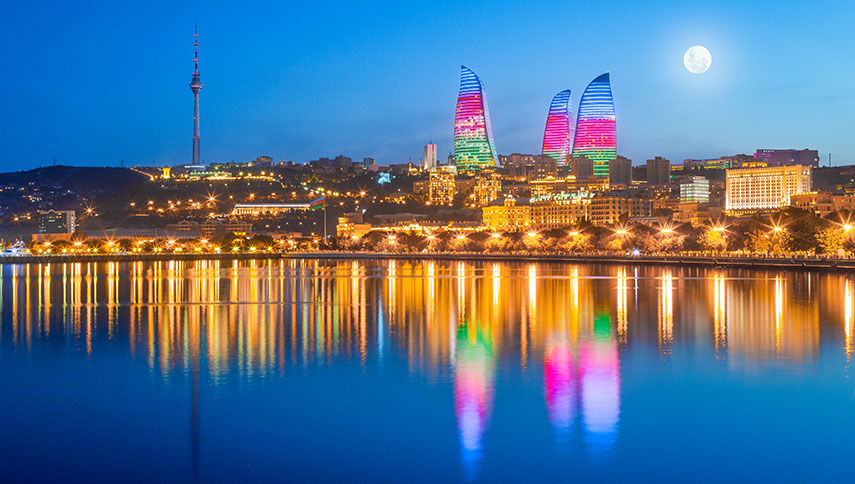 2. Flame Towers: 1a Mehdi Huseyn, Baku, Baku AZ1006
A trio of skyscrapers that, since their completion in 2012, have provided a stunning addition to the Baku skyline. The tallest of the 3 towers is 597 ft. The flames symbolise fire, and this is particularly resonant in a region where Zoroastrian worshippers believe that fire represents God’s light or wisdom. Natural gas flares shoot up from the ground at the Yanar Dag near Baku.
The architect of these beautiful skyscrapers was HOK and it is estimated to have cost US$350 over a 5 year construction.
Within the towers are 130 residential apartments, The Fairmont Hotel Tower (with 250 rooms and 61 serviced apartments) and 33,114 square metres of office space. Each façade functions as a large display screen and the towers can be illuminated in orange to further resemble their fiery inspiration.

3. Maiden’s Tower: Downtown Baku Old City, Baku 1000
Baku’s foremost historical icon, with views of the Baku Bay, the Old City and Baku Boulevard.
The original structure is thought to be ‘millennia’ old, but the exact period cannot be agreed on – some sources believe that it dates to 8th-7th century BC, others argue that it was actually built between 4th- 6th century CE. But what most agree on it that the structure you encounter today is mainly from the 12th century.
Thought to be a prime example of Zoroastrianism and pre-Islamic architecture. It is understood by some academics to be a Zoroastrian Fire Temple-Tower – with the 7 exits at the top representing the 7 steps to heaven in which they believed.
With the mystery of when and how the tower came to be also comes multiple legends and mysteries – many of which are related to the Islamic and Medieval period in Baku, while some pre-date these times. The most famous of these legends is of the fiery-haired virgin girl who saved Baku’s people from slavery – and became a ballet ‘The Maiden Tower’ by Afrasiyab Badalbeyli in 1940.
It is currently home to a museum that depicts the historic evolution of Baku City.
Open to visitors all year round. 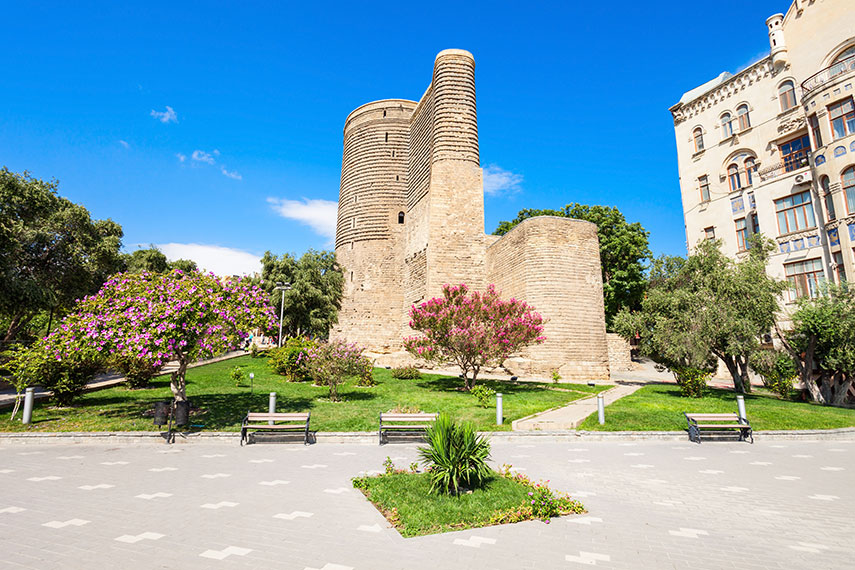 4. MOMA: 5 Yusuph Safarov, AZ1025, Khatai, Baku
Opened in 2009 at the initiative of the First Lady of Azerbaijan Mehriban Aliyeva and funded by the Heydar Aliyev Foundation. Architect Jean Nouvel and Chief Designer Altay Sadikh-Zadek avoided making ‘halls with corners’ and created open passages and walls that have staggered meeting points – allowing multi-dimensional perspectives.
Work is generally focussed on the latter half of the 20th century (much of the work is post 1980) and most are Azerbaijani artists – including Fuad Salayev and Huseyn Hagverdiyev and photographers Elnur Babayev and Tahmina Mammadova. But there are also works by non-Azerbaijani artists Pablo Picasso and Marc Chagall.
Open Tuesday – Sunday between 11am and 8pm. Closed on Mondays.

5. Heydar Mosque: Hamza Babashov St, Baku, Baku 1107
The best time to see this mosque is at night. Then, an unquestionably beautiful and imposing building becomes ‘other worldly’ as it is illuminated.
New by ‘places of worship’ standards – the Heydar Mosque was built in the architectural style of Shirvan Absheron and opened in the Binagadi district in December 2014. It was named after the former President of Azerbaijan Heydar Aliyev.
It is a massive structure, covering 12,000 metres squared outside (4,200 square metres inside) and the main structure is 55 metres tall – with each minaret 95 metres. It is the largest mosque not only in Azerbaijan, but the entire Caucasus.
Inside is stunning – exquisitely decorated in typical Islamic style, with verses from The Quran written inside the domes.
Both Sunni and Shia Muslims pray here side by side. 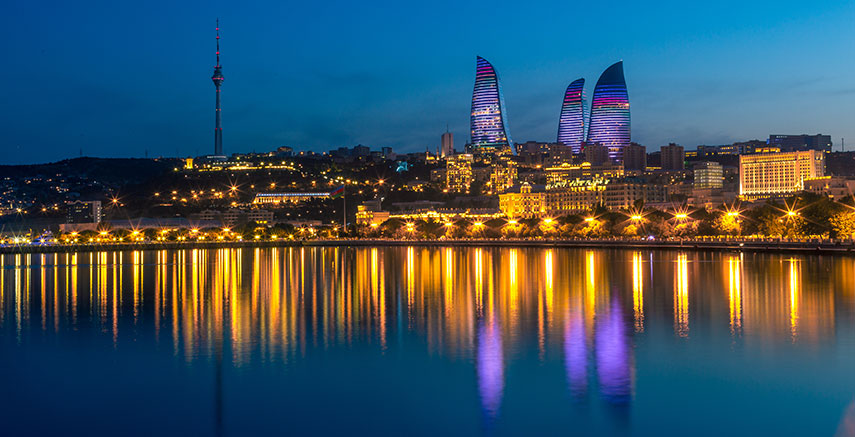 Come and join us today for an adventure of a lifetime!